The case for a real living wage 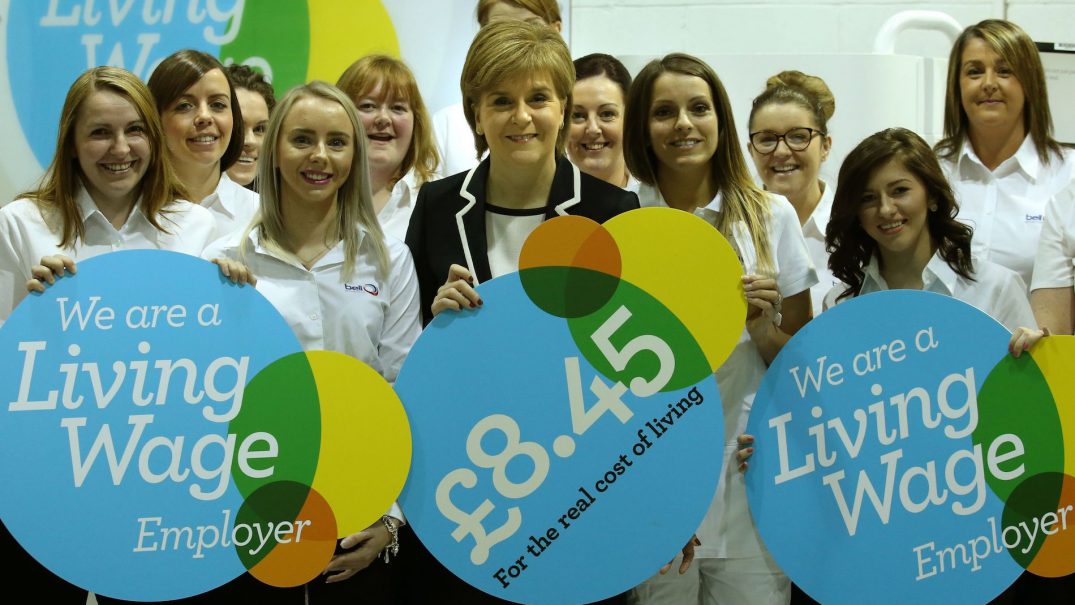 While attacking the ‘cost of living crisis’ was one of a range of former Labour Party leader Ed Miliband’s messages that failed to stick in the public consciousness, the fault did not lie in the legitimacy of the problem. The number of people struggling to survive while in work has steadily increased throughout the last decade, and the country is in a cost of living crisis even greater today as when Miliband headed up the government’s opposition six years ago.

Fundamental to this crisis is the abundance of low pay, and in-work poverty. Over half of those living in absolute poverty live in working households. People working full-time on the minimum wage lag behind, by thousands of pounds a year, the amount needed to live on a decent, no-frills standard of living as determined by the public1. As many were quick to point out, George Osborne branding of his minimum wage a ‘National Living Wage’, at £7.20 per hour (for over-25s), was well below the wage required to live on for many workers.

The Living Wage Foundation estimates a living wage to currently be £8.45 per hour and £9.75 in London. While Osborne pegged the current minimum wage to rise to 60% of median incomes by 2020, given Brexit, the likelihood of increased inflation and the persistent depression of real incomes since last year, this is now unlikely to even reach the headline aim of £9 per hour by that year.

Implementing a significant change in the wage floor of the labour market is an act that has a very high number of effects, some of which are reasonable to predict with some degree of confidence, and many of which are not. We are currently in one of the most uncertain periods of the UK economy in modern history, and the effects of a de facto living wage – of increased incomes, increased income taxes, possible short-term redundancies – are themselves interdependent with a range of other economic variables – aggregate demand, business and consumer confidence, fiscal discipline – that themselves are currently liable to change almost weekly, as the UK economy deals with its Brexit reconfiguration.

As a result, like with the Brexit discourse itself, the inherent economic ambiguity and uncertainty as to the true effects of a real living wage allows space for both fear-mongering, and utopian predictions on both sides of the debate, without the ability to either confirm or refute such claims categorically. When the national minimum wage was first introduced by Labour in 1999, the business community and Conservative party preached that it would cause mass unemployment as firms struggle to cope with their new wage bill; instead, employers adapted, adjusting profits and pricing strategies, changing pay differentials and improving productivity. Such predictions of mass job losses abound again with the prospect of George Osborne’s Living Wage and other, real living wage proposals, such as John McDonnell’s pledge for a £10 per hour minimum by 2020. Frustratingly, they cannot be dismissed, nor wholly refuted.

However, this should not prevent us making a few clear things clear. On the case of job losses, it’s important to remember that when a new wage floor is implemented, firms have a range of ways to deal with this new cost. Profits are reduced, job growth is slowed or employees’ tasks and responsibilities are increased. Business’ argument that a strong wage floor is not feasible for many small businesses to deal with was wrong in the 1990s, and the early evidence on this decade’s rises, looks wrong again.

When Osborne raised the minimum wage for over-25s from £6.50 per hour to £7.20, a Living Wage Foundation report found that only just over a third of firms reported their wage bill increased, and two-thirds of these firms managed to adjust through reduced profits or price increases, rather than redundancies. Only 14% of companies chose to use less labour, whether that was through slower recruitment, fewer hours offered or redundancies. There was no net slowdown in job growth across the economy for young people, the over-65s, women and part-time workers, the employees most likely to be earning the new minimum wage. This shows that evidence for ‘mass job loss’ concerns is very thin, and as such does not undermine the prima facie, fairness argument for a living wage, which says an economy fails to be just when one or more workers are employed on a wage that is not sufficient to live on locally.

Of course, we should not ignore the transitional challenges for small firms into a new wage structure. Companies do take time and managerial competence to adapt to new costs. Business figures often portray these challenges as fundamental incompatibilities with economic prosperity, rather than simply short-term hurdles. To transition overnight without any assistance to an economy with a full living wage may indeed see businesses in certain sectors, such as agriculture, textiles, social care and small-scale retail, fail to adapt with the requisite structural change to sustain their employment levels.

Thus, it will be crucial to recognize and work with the diverse incentives that drive firms’ operations across a range of industries, industries that have very different structures, profit margins and productivity gaps. While there is little excuse for the multi-national firm recording millions in profit every year, the village charity shop or church gift shop that employs a few teenagers may not be able to go to £10 over night. Firms that are not given the time or the opportunity to adapt to a living wage world may turn quickly to redundancies in the face of a higher wage bill, and this will not lead to higher living standards, welfare or flourishing of would-be employees who cannot then find work.

An additional case is also mounting for the living wage based on productivity grounds. The UK’s productivity is abysmal. The gap between the UK’s output per hour and the average of the other G7 countries’ output per hour at its widest level in 2014 since records began in the 1990s2. Perennial depressed productivity is an incredibly difficult, structural dysfunction to solve, and has essentially eluded every modern government.

This crisis is deeply intertwined with the abundance of low pay and in-work poverty that characterizes the UK’s labour market. The combination of low pay, high precarity, low motivation and high turnover mean productivity gains are incredibly hard to mechanize. However, more than 80% of London Living Wage employers3 study reported improvements in staff performance, while both absenteeism and staff turnover, two foundations of low productivity, both dropped 25% on average across the firms in the study. The same study found that 80% of such employers believe its implementation enhanced the quality of work in their staff.

The living wage question, like all questions of fundamental economic structuring, is constituted by complex economic variables, the interpretation of which are ripe for partisan distortion. It may be frustrating to have to integrate our current, unjust economic structure into our policy, policy that is driven by a desperate desire for overturning persistent economic injustice. However, we can only work with the current economic configuration in front of us, without the ability to structure the economy from scratch.