Another Brexit is possible 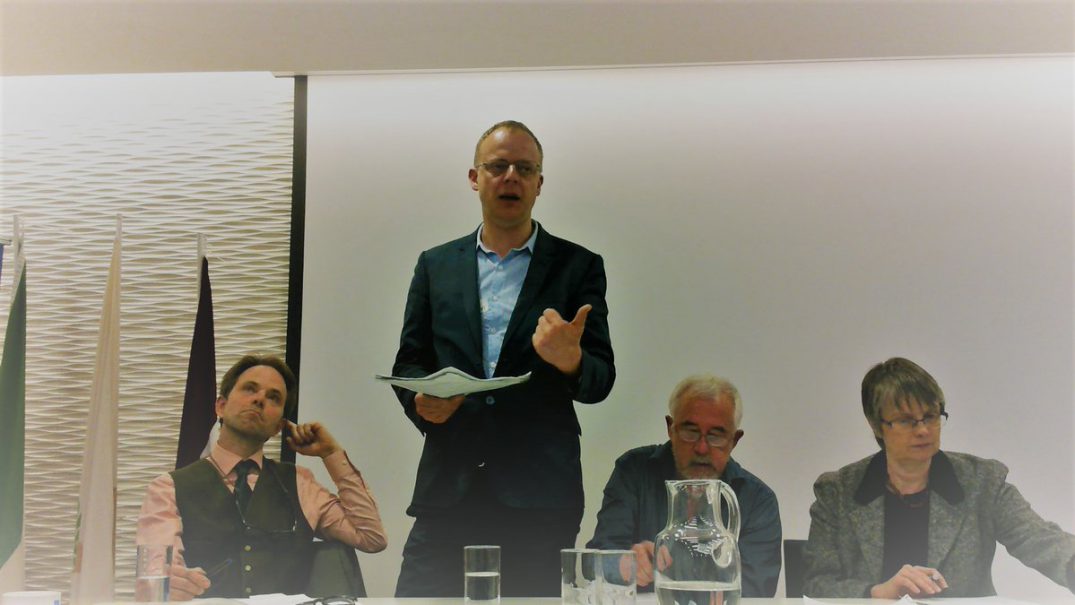 Nick Dearden of Global Justice Now speaking at the launch of the report, alongside Rupert Read, Victor Anderson and Molly Scott Cato.

We live in febrile, exciting, awful, too-interesting times. When we look toward the future, very little can be taken for certain. But here is one thing that seems pretty certain as she triggers Article 50: Theresa May’s government is going at the least to try its damnedest to exit the UK from the EU. Whatever the cost. And when a government that commands a Commons majority is determined to try to do something, it rarely fails. Though there are many contingencies and uncertainties, it would be irrational not to plan on the basis that by 2019-20 the UK will most likely have left the EU.

The process of these next three years, as it forces this unprecedented and perilous change through, could be very, very difficult for the government. So, though right now the Conservatives seem to be quite secure, it would be unwise to bet that their electoral future will look nearly so secure, 3 years on.

Let us dare therefore to dream. Imagine in 2020 a ‘Progressive Alliance’ managing to displace the May government, at the ballot box. Imagine perhaps a post-Corbyn Labour minority government, governing with the assistance of confidence and supply arrangements with the SNP, Plaid Cymru, the LibDems and the Greens. Imagine an increased cohort of Greens: some parliamentary party colleagues to join Westminster’s shining star, Caroline Lucas.

The question then arises: what kind of post-EU Britain would – should – those Greens push for? For here is the interesting fact: while it is going to be a Conservative government that negotiates Brexit, most aspects of post-Brexit Britain will still remain to be decided in 2020. Whoever takes power in 2020, it is they, and not the present government, who will have the power to determine largely the actual direction of this country, post-Brexit.

It is therefore not too soon, as Article 50 is invoked, and as we start to think forward to where we would want Brexit to be heading, and as we start to set out an alternative stall to the government’s vis a vis this country’s future, to ask this question. What should a post-Brexit Britain look like? Could there be a ‘Green’ Brexit? Indeed, assuming that the UK does exit the EU, the question is unavoidable.

It is this question that Victor Anderson and I are the first to address, in a report we launched this week, a report we were commissioned to write by Molly Scott Cato MEP.

Here is a very brief outline of our answer:

The world is a very different place both from the introductory economics picture of “free trade” and the ideologically driven vision of a gigantic WTO agreement. In practice, what there is now is a series of trading blocs, such as the EU, NAFTA (North American Free Trade Agreement: USA, Canada, & Mexico), and Mercosur (parts of South America, including Brazil and Argentina), which have agreements within the bloc and then agreements between each bloc and the other blocs. These agreements cover tariffs, product standards (often negatively referred to as “non-tariff barriers”), investment, and related issues such as subsidies (disguised and undisguised) for particular firms or sectors.

Brexit means that the UK would be participating in this system without being a member of any bloc. This would make it vulnerable in negotiations, because on its own the UK would have far less bargaining power than if it negotiated jointly with other countries, for example in the EU or conceivably as a member of NAFTA, because it is a much smaller and therefore less attractive market.

This reduction will become possible because the UK will no longer be bound by EU or customs union agreements. It is also what is implied by the politics of a revolt against the economic effects of globalisation. And it is desirable for reasons that have become increasingly clear in recent years.

I have not sought here to lay out the laundry list of policies that Victor and I suggest would work for a post-Brexit Britain along these lines: read the full report for the details. What I’ve sketched here is simply the overarching rationale for a version of Brexit that – rather than removing protective regulations against environmental threats – actually deliberately sets out to establish new high Green standards that our children will thank us for. We need to reclaim the word ‘protectionism’: After all, protecting what we love, protecting the vulnerable, protecting nature, is exactly what most of us are in politics to do.

We believe that the ‘another Brexit is possible’ option set out in our report has the potential to turn Brexit from being a potential disaster for the UK into being the constructive start of a radical new approach to the very real problems of globalisation. An approach which seeks above all, wherever possible, to relocalise.

We believe further that it may prove useful, in the coming months and years, to hold the kind of proposal we’ve made alongside what the British government is doing, as an alternative model, to serve as a basis for critique of government policy – and as a basis for a rallying call for changing that policy.

…And, especially if that policy doesn’t change — as a basis for a rallying call for changing the government, come 2020.