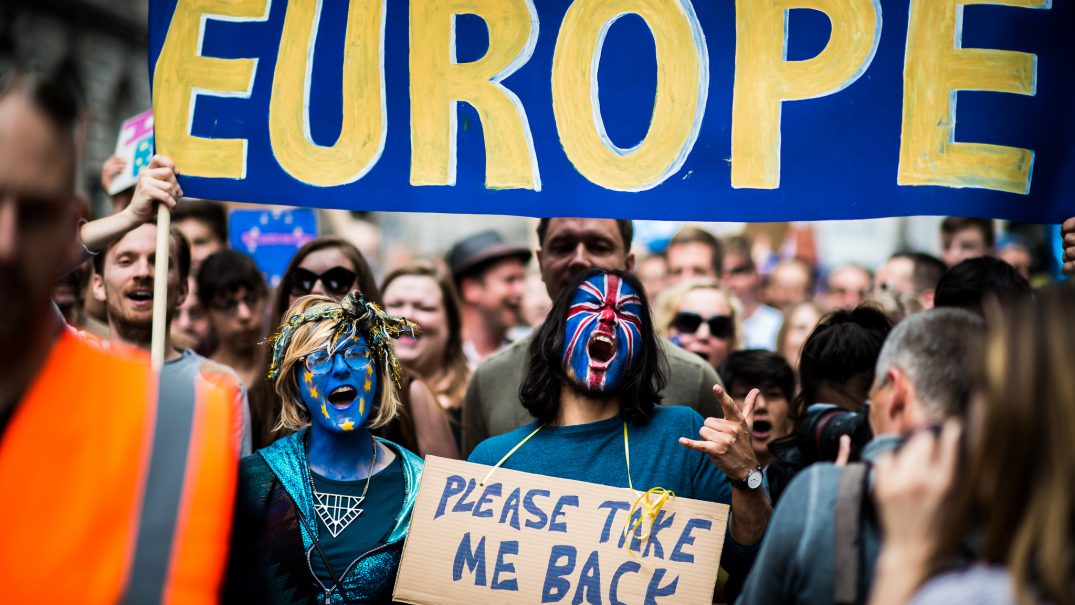 Eighteen months on from the Brexit referendum, the story that the ‘people have spoken’ is only one version of the truth. There was only a very small majority for leaving the EU: more than 16 million people were on the electoral register but did not vote, and a further 2 million were not even registered. It is now evident that many of those who voted to leave had no idea what this entailed, or the likely costs. Surveys confirm that enough people have now changed their position that, if there was a second referendum, a majority would now vote to remain in the EU.

But both the Government and the Labour opposition seem determined not to have a second referendum, despite the mounting evidence of the massive destruction Brexit will cause to the British economy. There is a daily record of companies preparing to leave the UK and establish themselves elsewhere in the EU. Cumulatively, the impact on GDP, employment and the public finances are going to be extremely large and yet these costs are simply shrugged off as if they were obviously worth enduring.

To take the most obvious example, let us consider banking and financial services, the only sector where the UK has established a global position. Many banks and associated enterprises have already begun the process of moving to Paris, Dublin, Frankfurt and elsewhere. These are highly paid jobs in firms that are very profitable and which account for a very significant proportion of GDP and government revenues. The CEOs of banks have been perfectly open about their planned shift to other locations, and have called on Government to re-evaluate their policies but to no avail. The consultancy and auditing firm EY has estimated that on day one of Brexit some 10,500 jobs would be lost in the City, and they had previously estimated that a total of 83,000 jobs would disappear.

Two EU agencies have already announced they will be moving to other locations in the EU – the European Medicines Agency and the European Banking Agency, with a loss of skilled jobs. In the case of the EMA, the transfer of jobs to Amsterdam will be 900 – all highly skilled and professional. More worrying is that the move of the EMA will lead to disinvestment in the UK by pharmaceutical companies as they shift their clinical research activities elsewhere.

Other sectors have pointed to the impact on their ability to function if EU residents leave. In the higher education sector, around a third of academic posts are filled by EU citizens – with many of them in scientific areas – and many university leaders have warned of the effects on system capacity. The impact on construction, health and social services, on transport, on agriculture, on tourist and related services have been enumerated and yet are shrugged aside as if they were manageable and unimportant. How the UK will source the 40% of food that is currently imported and which sustains national food production, given the massive dependence on EU labour, remains a mystery.

Then there is the economic and social impact on EU residents, and the effects on UK residents living and working in the EU. Not least of the predictive costs are those on Ireland where 80% of exports are sent to the UK, and where there is a possibility that these will subsequently face import tariffs. The impact on Ireland is more or less ignored in the UK and instead the focus is on the issue of the border between the North and the Republic. While this issue is important, it is clearly unresolvable unless the UK remains within the single market and the existing customs union. To believe that there is any other practical solution is like believing the moon is made of cheese.

Employment will contract, incomes will fall, tax revenues will decline, prices will rise and the balance of payments will worsen. The sterling exchange rate has already fallen against all of the major currencies with a decline of more than 15% against the euro. The LSE has estimated that the impact of Brexit has already been significant and that the average household has experienced an increased shopping bill by £400, largely due to the fall in the value of sterling. The effects will not be confined to the UK; residents from the EU will be directly and indirectly impacted by the resulting shifts in demand and supply.

Brexit has already diverted the resources of Government and of Parliament at considerable cost. Governance has more or less come to a standstill as the Tories battle it out amongst themselves about what kind of relationship the UK will have with the EU. It has always been clear to anyone who knows anything substantively about the EU what would be on offer, and this really should not have been a surprise to the British Government. There was never any chance that a deal would be negotiated which threatened the stability of the EU, and this would be paramount in any discussions with the UK.

Key basic principles such as freedom of movement of labour, goods and capital were sacrosanct and would be retained at all cost. So would be the demand that the UK meet all of its financial obligations. It has also been made clear that no trade deal would be possible after Brexit except under conditions in which the UK accepted and applied the existing regulatory regime. This means that the UK could not be in a trading relationship with the EU if it deregulated existing labour, health and environmental standards – and would be expected to apply future changes as well.

A deal would have to be struck for EU citizens in the UK, and for UK citizens living in Europe, that protected all of their existing rights. These and other key elements of the ongoing relationship between the UK and the EU would need to be subject to the European Court of Justice. Finally, a deal had to be agreed that was legally binding on both parties to any agreement to prevent any hard border between Northern Ireland and the Republic. In effect, this last requirement means that the UK has to remain a member of the single market and customs union.

Given these conditions, why would any rational government pursue Brexit at such immense financial and non-financial cost?  On the face of it none of this makes any sense given the easily predicted consequences of Brexit and the uncertainty created both in the UK and with our partners in the EU. Everyone has wasted resources over the past 18 months on negotiations and posturing that have led to an outcome that was always inevitable. One of the less evident consequences, but a cost nevertheless, has been a breakdown in national social cohesion and a release of ethnic tension. Putting this genie back in the bottle will not be an easy thing to achieve, with or without Brexit.

What are the forces driving Brexit given the above analysis? We now have more information on the funding of the leave side of the referendum, and after a good deal of pressure the Electoral Commission is finally doing some real analysis of the sources of funding. There can be no doubt that this funding was illegal and largely from overseas sources. In a series of articles Carole Cadwallader has documented the role that a very right wing American billionaire had in providing financial and non-financial support to a UK company called Cambridge Analytica. The purpose of this structure was to infiltrate social media with fake news so as to influence voting behaviour in the referendum. This process acted as support for the lies being told by Farage, Gove and Johnson and others who bombarded the electorate with falsehoods about extra funding for the NHS, swarms of Turkish Muslim migrants, and the threat from EU nationals to British livelihoods.

Also worrying is where most of the money for the leave campaign came from. It was supposedly provided by a millionaire called Arron Banks, but an analysis of his finances by openDemocracy suggests that he was in no position to make very large donations. So where did this money come from? This is presently under investigation by the Commission, but it is evident that it does not have the resources for such an investigation. Some of the funding was routed to the leave campaign via the DUP in Northern Ireland where the is no legal requirement to disclose the sources of funding.

This leaves it unclear where Banks’ money came from, except that we now have evidence of the role that Russia played in the US presidential elections and elsewhere. What is driving Farage, Mercer, Banks and their supporters? It is only too evident. They want to see the collapse of the post -war settlement in which the state actively intervenes in economic and social life in the interests of social stability and fairness in accessing social goods. They want to roll this back in the interests of the rich and the wealthy, and have managed to get Trump elected to pursue their objectives.

Brexit might yet do the same, and in the meantime, it has managed to divert the attention of policymakers in the UK from important issues such as how to reduce wealth and income inequality and associated issues of housing, jobs and pay. Brexit in their eyes is simply a source of instability that in the short and longer runs will enable them to bring about their ultimate right wing agenda. This includes a determination to deregulate the UK economy and remove regulations covering the environment, food safety, animal welfare and labour conditions.

But what of Putin: why would he be prepared to finance the leave campaign?  He has clearly been trying to undermine the EU for many years, hence his opposition to Ukraine joining the EU and to the EU sanctions after the annexation of the Crimea. Weakening the EU as was hoped would suit Russia just fine since this would further enhance Russia’s power in Europe. Furthermore, anything that weakened Europe’s military capacity would be highly desirable, as would anything that caused greater economic weakness.

Brexit is a failed process and will cause untold and unnecessary damage to the UK, the EU and elsewhere. The sooner it is dumped the better for everyone, including for those who voted for it given that most of the negative effects of Brexit will fall mainly on those living in the less favoured areas of the UK.

The question is: do we have political leadership capable of doing the obvious? The influence of big money is everywhere in politics – not least in the UK – and politicians are both too close to the rich and too isolated from the electorate. But it could all change. The Rand Corporation – a respected US think tank – recently published an assessment of the impact of Brexit on the UK . It has concluded that “a no deal Brexit will cost Britons £1,585 each. Even the softest Brexit of the customs union would damage the economy and any gains from leaving would take at least 12 years”.

Why would any Government, Tory or Labour, go down this route if it had the interests of the population, and of Europe, at heart?