Brexit and the global south: Why it’s time to end free trade imperialism 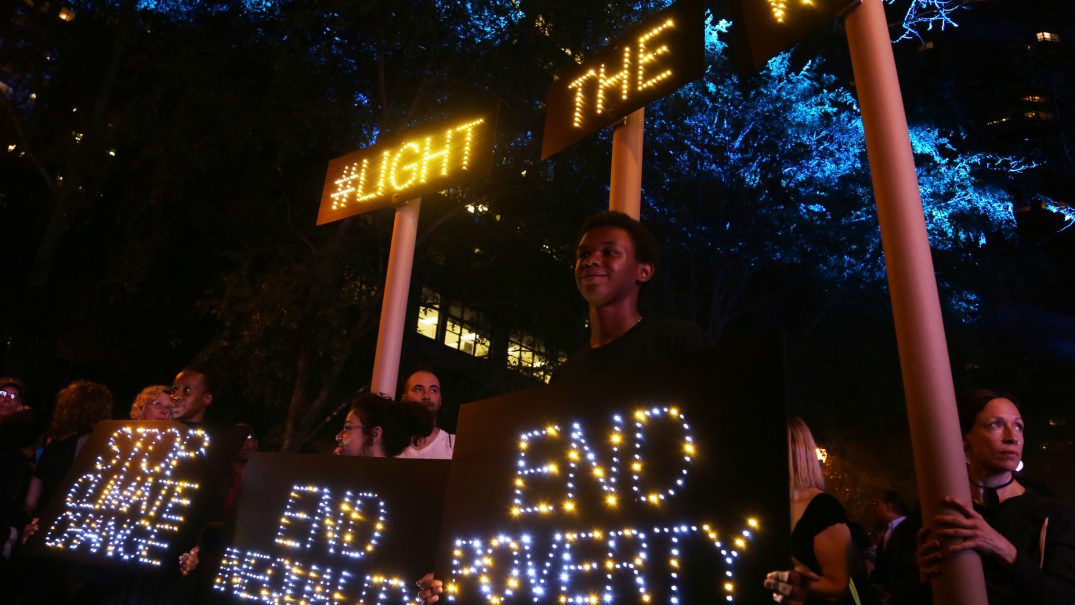 On the eve of the Sustainable Development Goals Summit, activists and campaigners come together near the UN building in New York for a global celebration called Light The Way. DFID / Flicker. Some rights reserved.

At the end of last year, a news story was published with huge implications for ‘international development’: a drop-off in commodity prices through 2016 dashed hopes that the world’s poorest countries could escape extreme poverty by the end of the decade.

The story raises a critical question directly linked to what Brexit will mean for countries of the global South and the reality of what ‘free trade’ and protectionism mean in the context of economic development – a reality brought into sharper relief in recent weeks by a long-running spat over trade at the G20 and Liam Fox’s focus on signing tariff-free trade agreements around the world.

Why is it that global trade policies continue to ensure that the world’s poorest countries remain dependent on the export of primary commodities, whether food products, metals or minerals? And what, if anything, will a Brexit UK do to address this?

These questions are particularly relevant in light of Nigeria and Tanzania’s confirmation that they will reject the EU’s proposed Economic Partnership Agreements (EPAs) for West and East Africa respectively because they will prevent African industrialisation.

And they must also be placed in the context of official international development policies: the UN Sustainable Development Goals (SDGs) explicitly target “sustainable industrialisation” and the requirement to give “respect for each country’s policy space and leadership to implement policies for poverty eradication”.

Nigeria and Tanzania’s reaction to the EU’s proposed agreements highlights the divide between what Northern-authored trade deals claim to offer and how they can directly inhibit the ability of Southern countries to enact their own industrial development policies.

While the European Commission holds to a neoliberal mantra – redolent of 1980s structural adjustment programs – of removing ‘barriers’, meeting ‘international’ standards and reforming the public and private sectors, a different view holds sway in Tanzania, where there is awareness that a recent ban on the export of mineral sands from gold mining in favour of local processing would not be allowed under EU trade terms.

Tanzania’s foreign affairs permanent secretary Aziz Mlim argues that the EU trade regime: “… will not benefit local industries in east Africa. Instead it will lead to their destruction as developed countries are likely to dominate the market.”

Frank Jacobs, President of Manufacturers Association of Nigeria (MAN), expressed a similar concern, explaining that Nigeria would experience an: “… accelerated shut down of the few surviving industries in the region. This will further de-industrialise the region and would have catastrophic implications on employment generation thereby worsening the poverty situation in the region.”

Most worryingly for the EU – and the UK, which plans to roll over EU agreements – Nigeria’s rejection may trigger similar refusals from other West African states.

For many focused on trade and development post-Brexit, a key ask, now granted, is that the UK carries over existing EU schemes that grant poor countries tariff free market access for exports.

But the UK must go further. Brexit trade policies will do little for longer term economic change in the South unless poor countries can export processed or manufactured goods with similar preferential schemes, or, conversely, use tariffs to shield emerging industries from international competition. On top of this, the Northern-led agenda of using trade deals to privatise public services and grant corporations legal powers to sue states outside national jurisdictions offers little in the fight against poverty.

As such, the option for poor countries to adopt protective measures is critical to fulfilling not only industrial policy SDGs, but also to lessening dependence on commodities – and in so doing, providing an economic platform for diversifying economies and alleviating poverty.

And it is here that the simplistic free trade vs protectionism framing that is shaping Western discourses on trade – especially post-Brexit and the rise of Donald Trump – must be rejected.

This framing, evident in the tussle between the EU and the Trump administration within G20 talks, pits the little-loved rules and institutions of an international liberalising order against a belligerent economic nationalism. However, this obscures the fact that rich countries only pursued free trade after they ascended to the peak of the global economy; they used protectionism to ensure that domestic industries grew ahead of being exposed to competition, before “kicking away the ladder” they used to get to their dominant positions.

Even trade agreements to which Southern countries are not party, such as the proposed Transatlantic Trade and Investment Partnership (TTIP) between the USA and the EU, are crafted in an effort to liberalise and undermine regulations in poor countries that rich country ‘investors’ do not like – such as tightened regulations on fossil fuel extraction.

By using the powerful political lexicon of ‘free trade’ to once again impose equal rules on unequal partners, the UK’s “Empire 2.0” would be alive and kicking.

The UK faces a simple choice. It can continue with “free trade imperialism” policies which are increasingly opposed in the global South, and which the UK, outside of the EU, may lack the influence to force through. Or it can carve a new path as a Northern state that pays more than lip service to commitments contained in the SDGs and other international accords.

Only one path can lead to trade justice for the poorest countries of the world.