China is great again, but how is Britain dealing with globalisation’s new champion in the age of Brexit? 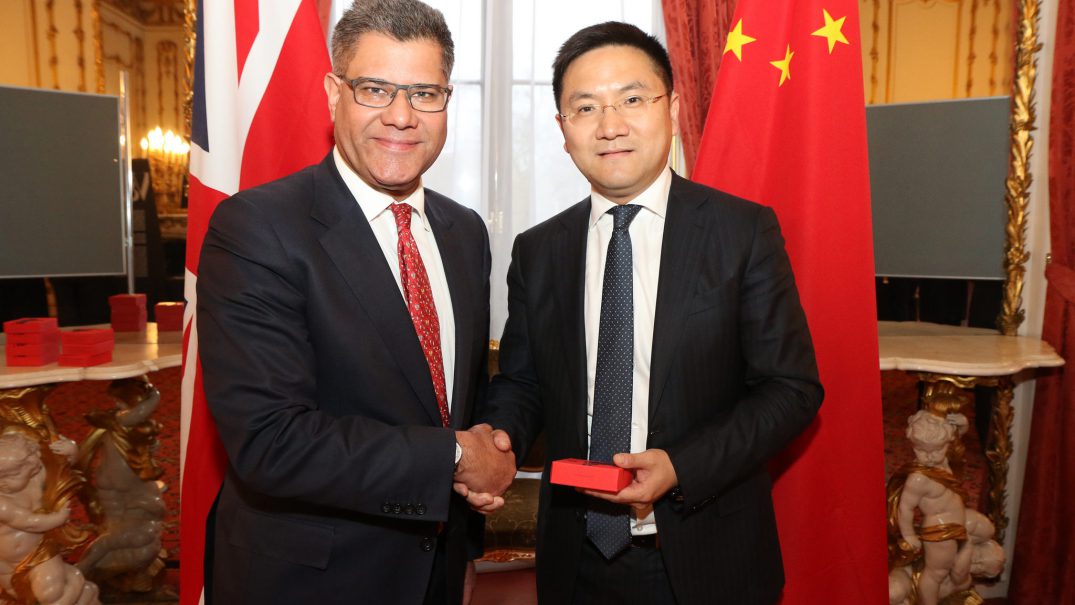 Event in London to mark the 45th anniversary year of ambassadorial relations between the UK and China, 29 March 2017. Foreign and Commonwealth Office / Flickr. Some rights reserved.

Politics is always entwined with economics and often produce strange and unforeseen results. With the UK withdrawal of membership from the European Union and Donald Trump’s isolationist US policies, it seems they have both relinquished their role as leaders of the globalisation process. On the other hand, in this year’s World Economic Forum in Davos, Chinese President Xi Jinping strongly defended free trade and urged the world to say “no to protectionism” in his speech addressing the world’s elite.

That message was repeated last Sunday in Beijing when Xi addressed a host of heads of states and high profile delegates at the high-profile Belt and Road Forum for International Cooperation. China, which will celebrate the Communist Party’s 100th year anniversary in 2020, is fast earning the recognition of being the new champion of globalisation.

When China joined the World Trade Organisation in December 1991, there were many predictions that it would be the number one economy in the world in the 21st Century. What it achieved during this early stage as the second biggest economy is staggering. The weekend summit was the global unveiling of Xi Jinping’s multibillion dollar Belt and Road Initiative.

The hugely ambitious foreign policy initiative and infrastructure enterprise will connect Asia to Europe and beyond. It consists of two main components: first is the land-based “Silk Road Economic Belt” (SREB) and, second, the oceangoing “Maritime Silk Road” (MSR). The ‘belt’ includes countries situated on the original Silk Road through Central Asia, West Asia, the Middle East, and Europe. The Maritime Silk Road, as a complementary initiative,  is aimed at investing and fostering collaboration in Southeast Asia, Oceania, and North Africa, through projects around the South China Sea, the South Pacific Ocean, and the wider Indian Ocean area.

UK Chancellor Philip Hammond represented the UK at the summit and the UK have already  upped the ante to cement the “golden age” of UK-China relations by launching the first direct cargo train laden with British goods bound for China last April. The train, which regally departed from just outside of London, traveled over 12,000 kilometers and nine countries to Yiwu with 32 matching royal blue China Railway Express shipping containers.

First proposed in 2013 by Xi, the Belt and Road Initiative (BRI) is an estimated $3 trillion infrastructure project that spans more than 65 countries covering 70% of the world’s population. It will build massive roads, bridges, gas pipelines, ports, railways, and power plants, as well as involve trade agreements and investments. There is no doubt that it is changing the contours of international development cooperation and affecting the geopolitics of energy as well.

The BRI is expected to create a vast Eurasian area of economic union and boost trade between China and participating countries. Press releases from Beijing announced that this mega-project is about connectivity and integrated open markets. There are criticisms from developing countries in Asia and Africa that it will increase indebtedness of poor countries as the financial agreements are mostly in the form of debt rather than development aid. The most vocal criticism came from India, which boycotted the forum due to the China-Pakistan corridor of the project, which will run through disputed territory in Kashmir.

In early 2016, Chinese financial institutions and companies have already announced over USD 1.1 trillion of funding for the BRI. This is in addition to the authorised capital of USD 100 billion for the Asian Infrastructure Investment Bank (AIIB) and another USD 100 billion authorised capital for the BRICS New Development Bank. Today, the EU is China’s biggest trading partner, while China is the EU’s second largest trading partner after the United States. Trade in goods between the EU and China is worth well over €1.5 billion a day, with EU exports amounting to €170 billion and imports to €350 billion in 2015.

China also joined the European Bank for Reconstruction and Development (EBRD) in January 2016. Its membership facilitates the EBRD’s investments to the BRI in member countries, many of which will be on the construction of network of transport links between Asia and Europe that will also cross many of the countries where the EBRD invests in.

China and UK’s Golden Age of Partnership: How to Ensure that People Matter?

Chancellor Hammond said that the UK will be a natural partner for China’s new Silk Road programme and Theresa May’s government is obviously keen to sign a free trade deal with China after Brexit. Since the influx of Chinese capital to Europe, the sectors that most attracted Chinese investors have been energy, automotive, food and real estate. The UK is the biggest recipient of overseas direct investment in Europe. Chinese investors have poured $38bn (£29bn) into a broad range of assets ranging from prime London real estate to banks, energy projects and football clubs since 2005.

UK real estate is particularly attractive as Chinese investors see it as being stable and the legal system makes it accessible to them. Chinese investors have put more than $12 billion into UK property – nearly a third of China’s overall investment in Britain. The purchase of London’s “Cheesegrater” skyscraper by China’s CC Land for £1.15bn last March was one of the prominent deals in 2017.

In the same year Chinese companies invested £4 billion in London properties, which is 30 percent higher than the 2015 record. Although the U.K.’s vote to leave the European Union lowered prices for Chinese buyers by the depression of the pound against the yuan, any longer-term profits depends partly on whether Brexit will drive down rents and property values.

Many studies are asking whether China is exporting its investment model to economic partners and if that will be to the advantage of the economy of trade and investment partners. The bigger question is whether the future UK government after the June election and after Brexit is ensuring that new trade and investment treaties will be oriented towards equitable, democratic, inclusive and sustainable development for UK citizens.

Is the new economic relation with superpower China leading to a UK that is more responsible for human rights and environmental equilibrium globally? Are human rights principles part of the future character of the UK foreign and trade policies? In the age of Brexit, our foreign policy is as important as domestic policies.

This article was originally published at Global Justice Now.