Why economics has a problem with women 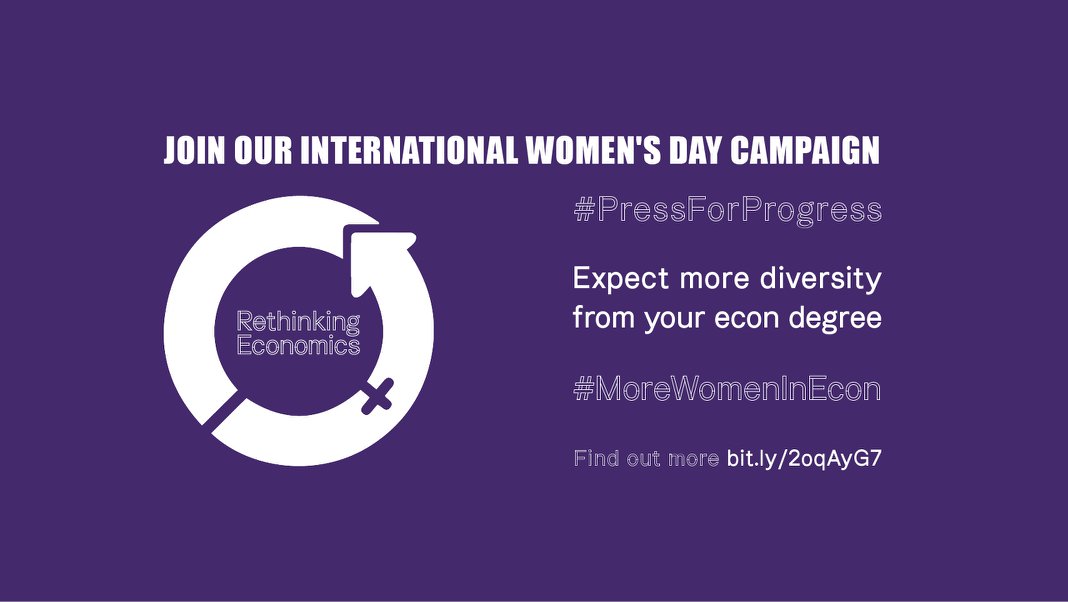 This International Women’s Day, Rethinking Economics is campaigning to #PushForProgress and get #MoreWomenInEcon. In this article, six current female students, all part of the Rethinking Economics student network, offer their voice on why economics has a problem with women.

“Women are invisible when you study economic theories. Economics, especially neoclassical economics, uses heavily ‘male centred’ concepts and language. For instance, of the central theories, the model of the ‘economic man’ is defined by self-interest, greed and actions that are usually associated with a ‘male’ pattern of behaviour. This kind of thing is demonstrated in the approach of market logic, too, in which work traditionally undertaken by women such as household labour or caring, is ignored and thus neglected in GDP analysis.

“However, with a closer look it becomes clear women are interested in the economy. Many study other social sciences such as politics, anthropology or history, which incorporate economic theory, but through approaches that might appear traditionally more relatable to women. A more pluralist degree invites critical thinking and opens the doors to engage a more diverse body of students.”

Gender Dynamics are not addressed in the classroom

“Economists are terrified of discussing political issues for seeming non-objective, especially issues concerning gender. But including gender issues in the curriculum is not only a political claim, it is also an economic one. For example, one of the central pillars of economics is understanding the dynamics of economic growth. It has been proven by study on study that female participation in the workforce and female representation in the board room has a large impact on growth. Thus, if economists want to understand growth, why neglect studying one of the factors influencing it? And this is just one of many examples. If we want to understand the economy, gender issues is something economists should be more curious about.”

There are few women role models in economics, and the ones who are in economics are much less likely to achieve a promotion

“Going through four years in an economics department can often seem quite discouraging if you aspire to be an academic. Being a woman, however, brings about yet another nuance to it. Although, the gender diversity in an undergraduate classroom is often balanced, the share of female economists progressing to a higher stage in academia decreases as the prominence of the position increases — as has been shown by the American Economic Association. The lucky (read: hard-working) ladies who manage to secure a tenure position often face a range of stereotypes, as documented by Alice H. Wu .

“And, of course, this is nothing new. When studying the history of economic ideas dating from Ancient Greece to present times students only hear of women when and if feminist economics is discussed. The explanation often is something along the lines of ‘times were different’ or ‘this is how it used to be in the past‘. Other fields such as the STEM subjects have recognised the economic benefits of having a more equal gender representation in academic and research positions. Economics, as always, seems to be the only one stuck in the past.”

Essential topics such as health and education are undervalued

“Many women don’t consider a career in economics as an option. This may be due to their preferences; women may favour careers in other fields (health and education being the common ones). Naturally, there is nothing wrong with this; everyone deserves to choose which area to work in. However, in some cases, it is undoubtedly because people don’t deem economics an appropriate career choice, or they don’t think it relates to the topics they find interesting. Economists have failed to make the public aware of the discipline’s wide-reaching real-world applications beyond banking and investment, including in health and education. I believe a priority of the discipline should be on improving peoples’ understanding of the many uses of economics so that a wider range of individuals will find it worth pursuing. There are several ways this could be achieved: approaching young people, simplifying the language used, among others.”

Household labour and care are not counted as valuable activities

“It is not a generalisation to say that one of the first understandings of economics that one develops is that of a mathematical subject concerned with constantly evaluating the cost and benefit of our activities and choices, so that we obtain the highest gain from what we choose. Moreover, much of what students are taught suggests that you are a good, non-entitled citizen, as long as whatever you do can be directly converted into money for someone else, and accounted for in a country’s Gross National Product. Such definitions inevitably downplay the contribution of women in society because a large number of activities that tend to be done by women, including household labour and care, are not immediately translated into profit and neither are they accounted for in labour participation statistics. This causes women to be underestimated as economic agents.

“The economist Lionel Robbins once stated: ‘every act which involves time and scarce means (abilities, wealth resources, dedication) for the achievement of one end and that involves relinquishing their use for the achievement of another end, is an act that has an economic aspect’. Thus, it is only fair to say that women’s dedication of time, physical and emotional activity to core household labour and care, either by personal choice or necessity, while foregoing other intellectual or professional development areas  are indeed economic acts.”