Framing the economy: how to win the case for a better system 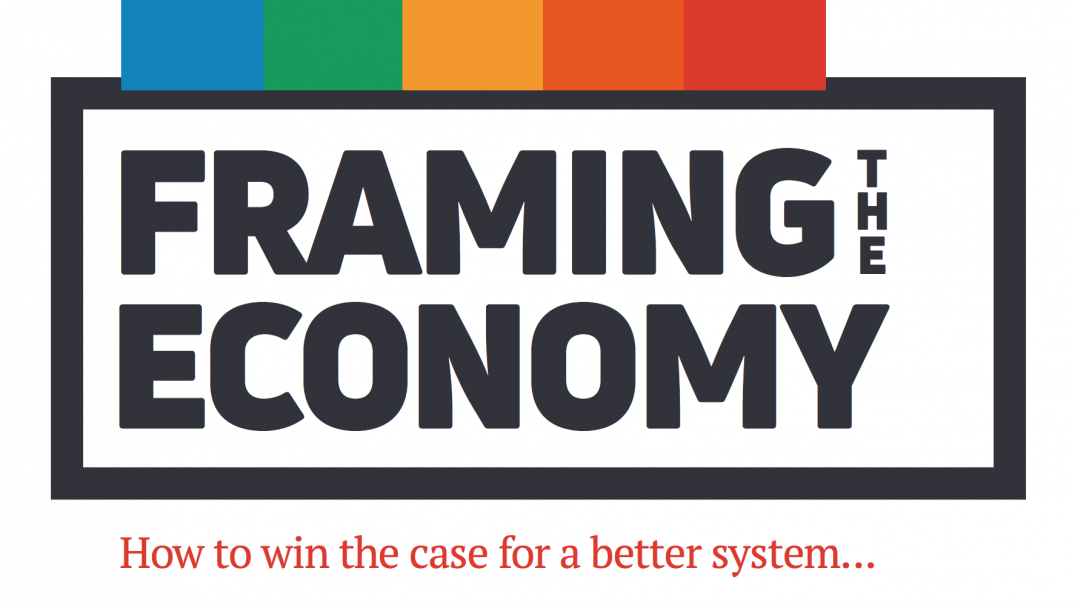 In 2010, the British right wing media and political parties told a very convincing story about the economy that persuaded the public we had no choice but to make massive cuts to public spending. You probably know it already: there was no money left, the economy was like a household budget, we’d maxed out the nation’s credit card, and it was time to tighten our belts. Anyone who watches the news will be familiar with this story, and if you’ve ever gone door knocking, you will have heard people repeat it back to you with total conviction. Since 2010, there have been 120,000 excess deaths linked to austerity, the Red Cross declared a humanitarian crisis in the NHS, and use of foodbanks has soared. Why, in light of all of this, did people still support it?

This was the backdrop for the Framing the Economy project. We believed the public endorsed a right wing story about the economy because progressives had failed to come up with an alternative. There weren’t that many progressive spokespeople on current affairs programmes, and when they were it was like they didn’t know what to say. So four organisations came together to understand how British people understood the economy and what new story could be told to persuade them to share our ideas. The four organisations that led the project were NEF (New Economics Foundation), NEON (New Economy Organisers Network), PIRC (Public Interest Research Centre) and the Frameworks Institute.

Of course a lot has changed since 2010. We didn’t expect the host of The Apprentice to become the American President, for example. But the tumultuous politics of the last eight years do suggest the austerity consensus is breaking down, and that there is a real opportunity for a resonant progressive story about the economy to win public support. After the 2017 election, where the Labour Party defied all odds to destabilise the government on an anti-austerity programme, the need for a project like Framing the Economy seemed more urgent than ever. The public are finally ready to hear about an alternative economy. This project is to help communicators explain how we might create one.

So in June 2016, shortly after 52% of the British public voted to leave the European Union, we got to work. The project consisted of three phases: first, we would conduct in-depth interviews with a cross section of British voters to understand how they conceive of the economy. Second, we would compare these interviews to how progressives think of the same thing, to identify gaps in our ways of thinking. And finally, we would come up with a new and resonant story, rich with metaphor, that would be able to close those gaps. The eventual story would be rigorously tested, so we could safely say it moved people’s thinking from where they were originally to where we wanted them to be.

Our interviews revealed several “cultural models” held by most members of the British public to understand how the economy works. We use the word “how” because cultural models show us how people think of the economy as a whole, rather than what they think about single issues – which is what opinion polls tell us. Cultural models are the durable, deep assumptions we hold to organise information and interpret the world around us. They are shared by all of us. Here are the main cultural models we found:

What the economy is and how it works

Why the economy works as it does

How the economy should work

Because we found so much fatalism in the responses of our interviewees, we felt that we could not make economic arguments to the public if there was a pervasive belief that change simply wasn’t possible. For that reason, the story we told argued that the economy had been designed as a result of human choices, made by a small elite, and could be redesigned with different choices. After testing and analysis, we found two powerful but fairly different stories that help shift people’s thinking. If you want to use them in your work, we recommend you read our full report on the project first. It contains lots of information how to best deploy the stories so they’re most effective, and there’s some pointers on what to avoid doing so you don’t undermine your argument.

There are a lot of different ways to interpret the term “populism,” so it is important to be clear that when we use the term, we mean a story that pits elites against the people. Story 1 is a fundamentally populist story. It contains the following elements:

Here’s a sample message that uses the value of economic strength. Our research shows this value is particularly successful in convincing Conservative voters, but this story can also be employed using the value of equality (but not both at the same time).

Over the last forty years, our government has become a tool of corporations and banks, and as a result our society has served their interests while failing to provide the broad-based supports that our economy needs to work well. This has weakened our economy, so it doesn’t meet people’s needs.

Our economy is like a programme that is constantly being revised and updated. Corporate elites have gained the password to the economy, and have programmed the economy to work well for corporate users. But the public have been locked out, so the parts of the economy they rely on have been neglected. As a result, many users of the economy experience constant glitches, and the economy as a whole doesn’t run well.

By programming the economy for financial services rather than manufacturing, we’ve destroyed the types of good jobs that put money back into the economy. And cutting taxes and privatising industries has undermined our ability to invest in ways that strengthen the economy and keep it running smoothly.

As a society, we need to prioritise a strong economy over the desires of corporations and wealthy elites. We need to reset the password and give control of the economy back to the public. That way, we can reprogramme the economy so it works better. We can create a strong and durable economy by guaranteeing decent wages for the least well-off, investing in local communities, and restoring public ownership of common resources like energy and transport. Creating a good society means taking back the password to the economy from corporate elites and reprogramming the economy so it runs smoothly and makes a good life possible for all users.

Sometimes it might not be appropriate for communicators to tell a populist story about the economy. So for these cases, we recommend the second story, which doesn’t blame elites but instead focuses on how the economy fails to meet people’s real needs. It includes the following elements:

Here’s a sample message that shows how these elements can be put together:

A good society makes it possible for everyone to lead a meaningful and fulfilling life. Yet, our society is currently focused solely on profit, and people are forced to chase money rather than happiness.

Our economy is like a railway network—it’s built to take people to particular places. The laws and policies that we make lay down tracks that determine where the economy takes people. Right now, our economy is built around profit, rather than being built to get people to their true needs. By allowing businesses to use zero-hour contracts, provide low wages, and require people to work more and more hours for the same pay, we have built economic tracks that move profit forward but leave people without the things they need to achieve wellbeing and realise their potential. When people don’t have decent wages or stable jobs, this undermines wellbeing in all sorts of ways. And for those of us who do have stable jobs, the need to work more hours means less time with our families and to pursue our goals in life outside of work.

As a society, we need to prioritise happiness and fulfilment over profit. We need to lay down economic tracks that make it possible for people to arrive at a meaningful life. We can build an economy that gets people to happiness by guaranteeing decent wages for the least well-off, banning zero-hour contracts, and reducing working hours. Creating a good society means laying down economic tracks that enable us to get to our real needs rather than keeping us all on a train whose only destination is profit.

So we’ve got a new story on the economy. But we need to make sure the public will actually hear it. To do this, NEON is founding a Communications Hub which will provide tools, research and training to make sure people in communications will be able to get the stories we’ve identified into the public sphere as efficiently as possible. We know certain frames already exist in political discourse – like the ‘system is rigged’ cultural model – but progressives need to insert themselves into public debate to make sure these frames are wielded in a way that does convince people to share our ideas.

The Communications Hub will launch in Spring 2018. It will expand on NEON’s existing programme to train progressive spokespeople who appear in the media, as well as introducing new training programmes like a training programme for press officers. The Hub will also help communicators frame their messages effectively, connect communicators in the same sector to one another, and share the latest research on framing and public opinion. In short it will do all of the things communicators should be doing, but simply don’t have time for. With the Communications Hub and the two stories from the Framing the Economy project, NEON will be able to provide the tools for communicators to fundamentally change the way we talk about economy – and then progressives can start telling stories that are as effective and impactful as the one the public bought into about austerity.