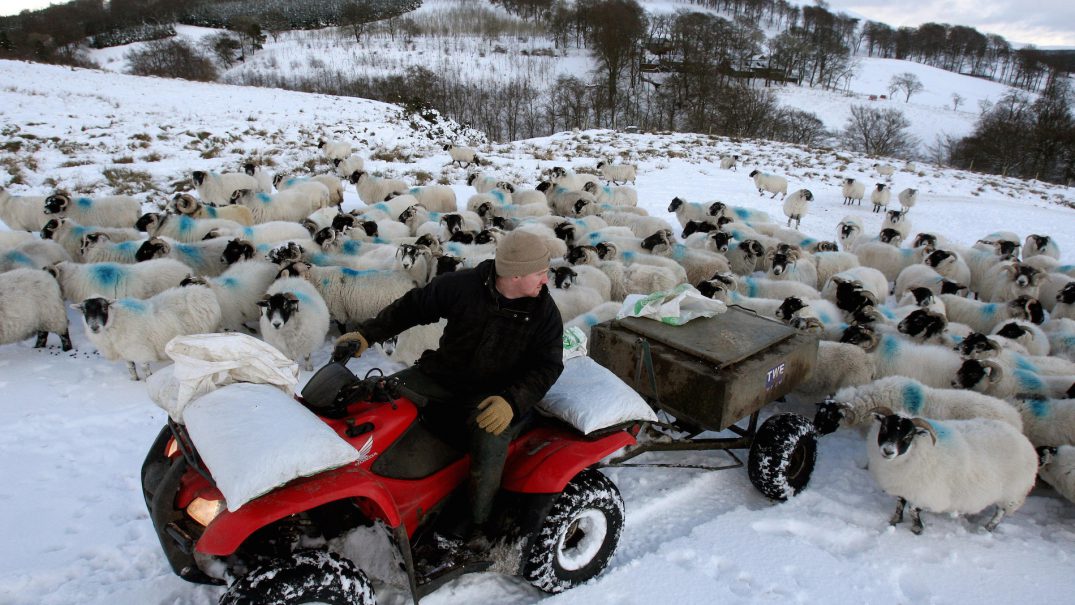 Farmer Peter Laidlaw from Craigannet Farm feeds his sheep on the snow covered hills of the Carron Valley, Central Scotland.

It can take a thousand years to form an inch, which can be washed away in a moment. It provides 95% of our food, and yet we allow it to blow off in the wind. Civilisations rise and fall on how they treat it, and we treat it like dirt. I am talking, of course, about soil. Researchers at Sheffield University concluded two years ago that Britain’s fields are so depleted that our earth had a hundred harvests left in it. So make that ninety eight. Other stats are even scarier. According to New Scientist magazine, if we don’t slow the decline, all farmable soils in the world will be gone within sixty years.

There are lots of simple things which the government really should be doing to combat this. It has a unique opportunity to rethink our approach to farming, as Brexit will remove the UK from the EU ‘Common Agricultural Policy’ (CAP), repatriating regulatory powers. The government should better regulate or indeed curtail disastrous maize farming. It should encourage more crop-rotation and upland tree planting; support wetland restoration and beaver-reintroduction; ban heather burning on grouse moors; minimise soil compaction from livestock and machinery, and invest in a mass switch to organic farming.

But it seems to me that, whilst all of these policies are necessary, they are insufficient to tackle the global scale of this crisis. Adjustments to conventional farming methods help – but they don’t tackle another great problem: that the extensive land use required by such practises means eating into ever more wilderness, wiping out ever more species. So as well as reforming our traditional land farming, we should look into alternative agricultural solutions, which will allow us to feed ourselves without asset-stripping the planet and dooming future generations to food scarcity.

Hydroponic and aquaponic farming allow for the growth of vegetables in water enriched with nutrients (in the latter case, through the presence of fish). Famous largely for its use by cannabis growers, many other kinds of crop can equally flourish without soil. It’s not a new idea: Francis Bacon referred to ‘water culture’ in his 1627 book ‘Sylva Sylvarum’, and there was an eruption of research immediately afterwards. Studies in the 1960s showed it to be no more efficient than growing food in good quality top soil. But with less and less good top soil around, those figures get more and more appealing. And that’s without mass investment in research and development that could make these methods even more efficient.

Similarly, 3D ocean farming offers the opportunity to grow much more of our food in the seas, whilst at the same time replenishing our life-bereft maritime ecosystems. Seaweed doesn’t currently form a significant part of the European diet. But it is delicious, and can also be used as livestock feed. As the soil crisis hoves into view, it seems likely that new farming techniques along these lines will see ever greater demand. And just as those countries who got ahead of the game in renewable energy twenty years ago are reaping the rewards now, it seems likely that government backing for such agricultural innovations will reap long term dividends on the global market.

But if we are going to go down this road, it’s worth asking another question: If the 1909 allotment act gave each of us the right to land on which to grow food, why not update it to give every family access to a space in a shared hydroponic tower? What about our numerous impoverished seaside towns? Why shouldn’t councils lead investment into ocean farming co-ops?

And if much large-scale modern agriculture is done by carefully programmed machines, why can’t we equally automate the growing of our own food? Why can’t Britain be the country which develops the technology by which your own veg, or seaweed, or shellfish, grown in your community allotment, can be picked by your community’s automatic harvester and delivered to your home by a community-owned self-driven car or drone? Ownership of Britain’s agricultural land is astoundingly unequal, and new technologies offer an opportunity to democratise food production, beginning to tackle a food poverty crisis whose icon has become a growing array of food banks.

The food and drink supply chain is the UK’s single largest manufacturing sector. It accounts for 7% of GDP, employs 3.7M people and is worth £80Bn per year. Because of CAP, it has been protected from the global market for decades. As Britain leaves the EU, we must decide what role it will play in the future of our economy. We can allow it to be asset stripped like most of our industry, or we can accept that at a time of fast technological change and vast environmental challenges, we will have to embrace the former if we are to survive the latter.