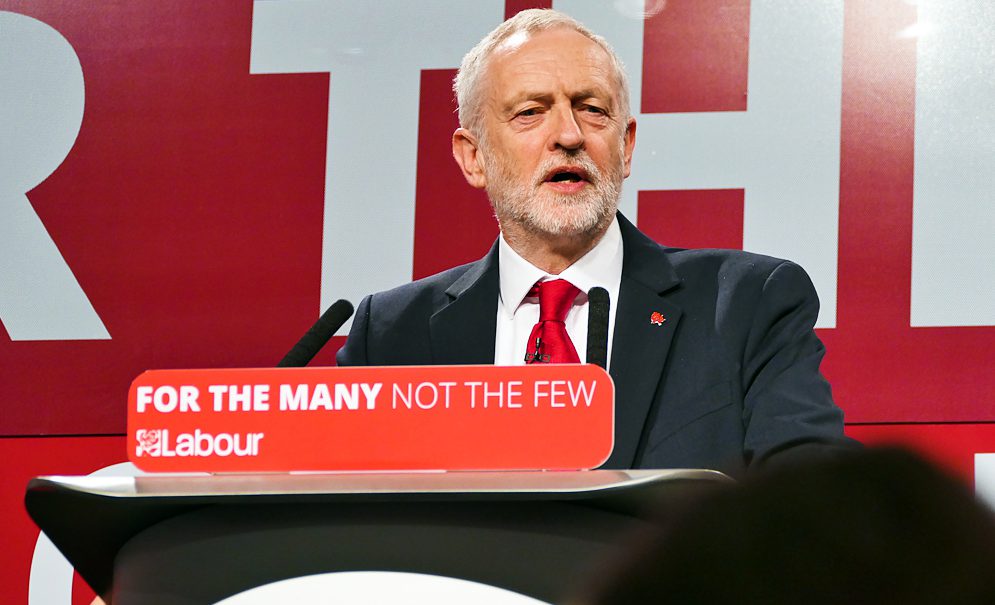 Supporters of Jeremy Corbyn’s Labour Party have become used to diatribes on social media which predict that its policies will lead Britain’s economy into a Venezuela type scenario, with a collapse in the currency and hyperinflation. However, readers of three recent blogs by Richard Murphy on his Tax Research website may be surprised to learn that Labour is supposedly trapped in what Murphy describes as “deeply neoliberal and profoundly conventional thinking”. They might also be puzzled to discover that this denunciation was provoked not by a new policy statement from John McDonnell, but by a two-sentence comment on someone’s Facebook page by James Meadway, McDonnell’s “chief economic adviser”, on what’s known as ‘modern monetary theory’ (or MMT). According to Meadway:

“MMT is just plain old bad economics, unfortunately, and a regression of left economic thinking. An economy ‘with its own currency’ may never ‘run out of money’ but that money can become entirely worthless”

In his first response Murphy produced a series of what he claimed to be ‘entirely fair extrapolations’ from those two sentences alone. These concluded with the rather unfair claims that Meadway believes that “achieving full employment and growth will leave the currency valueless”; that under a Labour government “austerity will remain in place”; and even that we can “expect Labour to deliver more Tory economic policy”.

Murphy has a well-deserved reputation as a leading figure in the tax justice movement who, as a trained accountant, has expertly dissected the tax avoidance practices of multinational companies and the failures of successive British governments to crack down on them. He is also a vigorous advocate of MMT, which explains why he was so annoyed by Meadway’s somewhat dismissive Facebook comment. Sadly, however, he now seems to have descended into quite seriously misrepresenting Labour’s policy position, and this has much wider implications.

One curious aspect to this is that Murphy’s onslaught is almost entirely focused on just one strand of Labour’s current economic policy. This concerns the so-called ‘Fiscal Credibility Rule’ which was formulated by two Keynesian critics of Conservative austerity policies, Simon Wren-Lewis and Jonathon Portes. The rule commits Labour to balancing the budget for current (day-to-day) spending over the first five years and borrowing only to invest in reconstructing the economy.

In his first two blogs Murphy disregards all Labour’s proposals for public ownership, ‘democratisation’ of the economy including support for cooperatives and workers’ rights, financial regulation, a national investment bank, and even policies he himself has supported such as a financial transactions tax and cracking down on tax havens. In a third blog, responding to a defence of Labour policy by Jo Michell, Murphy is dismissive of what he terms unspecified ‘supply-side reforms’. This suggests that Murphy has paid less attention to the debate that has been taking place within McDonnell’s team than The Economist magazine, which devoted a critical but respectful three pages to those same reforms.

Equally problematic is Murphy’s failure to acknowledge what he must know to be the case. Borrowing to invest is very different in its consequences than borrowing to finance tax cuts for the rich and corporations, which is what the Conservatives have been doing since 2010. If Murphy wants ‘demand-side’ policies to generate full employment and growth, job-creating investment programmes, whether they be for housing or for renewable energy and sustainable transport, will be far more effective in achieving those goals. By comparison the ‘multiplier effects’ on aggregate demand of tax-cuts are much more limited, because corporations and the very wealthy are more likely to save the money or invest outside of the national economy.

A close reading of Murphy’s argument reveals, however, the critical implication of his reliance on MMT thinking. Murphy believes that governments do not need to borrow on the money markets at all because the Bank of England can simply create as much money as needed with a few keystrokes on a computer. MMT argues that this is what normally happens when Governments spend. It claims that taxes as well as bonds sold to the ‘public’ are only necessary to withdraw excess money from circulation and avoid inflation (an argument which is not that modern, as it harks back to what Keynes argued during the Second World War).

As Meadway acknowledged, MMT advocates are correct to insist that states with ‘sovereign currencies’ (which critically no longer includes any of the countries inside the eurozone) can never run out of money. Central banks can create as much of it as they want with a few strokes on a keyboard. Indeed, the so-called quantitative easing (QE) programmes pursued by all the major central banks since the financial crash of 2008 has provided the most spectacular possible confirmation of that. Trillions of dollars, euros, pounds, and yen have been pumped into the system’s money markets over the last decade which, while helping to restore bank balance sheets, has also fueled a boom in asset prices (bonds, shares and property prices) which has mainly boosted the wealth of the 1%.

Back in 2013, the fifth anniversary report of the Green New Deal Group, to which Murphy contributed, called for Green QE. This, along with measures to prevent tax dodging, was to finance a programme of spending on green infrastructure projects of around £50 billion a year. Creation of a Green (or National) Development Bank would bypass the private banking system by issuing bonds which the Bank of England could purchase along with all the other bonds it has been purchasing under its QE measures. The advocates of this plan argued persuasively that this would be a far better use of the additional QE money than feeding into property prices in cities such as London.

So what’s the problem? And why did Meadway follow up his initial Facebook comment with the rather cryptic observation that ‘Any country that isn’t the US trying to apply MMT’s prescriptions would find itself in the same position’ i.e. ‘close to catastrophe’? As one commentator quoted by Murphy asked: ‘Why is the US different?’. Meadway did not respond to this, but Wren-Lewis himself has replied to Murphy’s critique of the allegedly neoclassical economic assumptions behind his models. I am not concerned here with that rather technical debate. In my view the critical question, which neither Murphy nor Wren-Lewis address, is what happens to the exchange-rate if the Bank of England keeps on pumping out more money when other central banks have called a halt to QE?

The MMT school originated in the USA amidst a current of heterodox Keynesians who are understandably insouciant with respect to the strength of the dollar. They stress the willingness of foreigners who want to sell to the US to not only accept dollars in payment, but to hold onto those dollars for extended periods of time. Central banks in China and the rest of East Asia (especially since the region’s financial crisis in 1997/8) as well as the Gulf states of the Middle East continue to hold billions of dollars in their reserves. Indeed, any attempt to swap sizeable quantities of those reserves into another currency or gold would lead to a sharp fall in the dollar and reduce the value of their remaining assets. In summary: the US is different because it retains the ‘exorbitant privilege’ of controlling the only national currency which also functions as world money.

This of course is not true of the pound. But when the US Federal Reserve, the European Central Bank and the Bank of Japan were all engaged in pressing those keyboards and generating extra liquidity to compensate for the implosion of the global banking system, the Bank of England could join in without worrying about the exchange-rate. A future Labour Government cannot assume it will be in the same situation. If it was, and interest-rates fell again to very low levels, the fiscal rule would, as Jo Michell noted, be suspended and fiscal policy can be used “with all means necessary”.

Murphy sneeringly commented that in this case the rule would be “just a sham”. He also sneered at the very idea that “Labour thinks it has to live in fear of the money markets. And so bankers. And so their supposed ability to manipulate exchange rates”.

Unfortunately, the experience of other radical social democratic governments in Europe (France in the early 1980s, Sweden in the early 90s) as well as the not so radical Wilson/Callaghan government of the mid-1970s suggests that any future Labour government should be worried about the money-markets. Even if exchange-rates are not simply ‘manipulated’ by what in the 1930s was termed a ‘bankers’ ramp’, they are vulnerable to intense speculative pressure. A Corbyn-led government, with its commitments to all the other radical measures Murphy ignores, may well have to ride out a period of capital flight and a sharp fall in the pound. Being aware of this possibility is not “neoliberal”. The recent crash of the Turkish lira (by 45% at the time of writing) is an illustration of what can happen in the course of a few days.

Some might respond that a fall in the pound will make exports cheaper abroad and contribute to reducing the current account deficit and rebalancing the economy. But Britain’s economy is also far more dependent on imports than the US, and after decades of deindustrialisation rebalancing will take some time. Meanwhile, the higher prices of imported food, energy and manufactured goods will cut into living standards – as they did after Brexit – and potentially fuel an inflationary spiral. In an extreme case this process can, as in Venezuela in recent months, make the currency worthless. Of course, the British state remains in a far stronger financial position than Venezuela or Turkey, but regardless of Brexit we do not and will not inhabit an autonomous national economy. The wartime economy, sometimes referenced when MMTers quote the Keynes of the 1940s, was managed on the basis of tight controls over both prices and cross-border currency flows – as well as cheap raw materials from the Empire and dollar credits from the USA.

Today, we have a national economy inextricably enmeshed in both the European and the world market. Most of the major banks and corporations operating in Britain are multinationals capable of transferring funds from one currency to another with the stroke of a keyboard. Imposing effective controls over speculators and tax dodgers will require at a minimum cooperation with the European Union. The best thinkers in the Marxist tradition always understood that socialism in one country was not a sustainable option. One could say the same today for the unfettered demand-side Keynesianism advocated by Richard Murphy and the MMT school.

Does that mean we should abandon hope and reconcile ourselves to more austerity? Certainly not. A radical break with neoliberal policies of spending cuts, deregulation, privatisation, outsourcing, and anti-union legislation remains on the agenda. There is much that still needs to be thought through about how to manage the threat posed by the money markets which Murphy blithely wants to ignore. There are policy proposals which I disagree with, such as retaining Trident nuclear submarines and wasting more money on HS2, and I am skeptical about recent proposals for a universal basic income.

However, I also attended the daylong New Economics conference in London in May which was open to all Labour Party members. What most impressed me was not the lineup of headline speakers, but the diversity of contributions in workshops I attended on finance and housing, and the openness to debate on questions such as alternative forms of public ownership and the urgent challenge of climate change. If Richard Murphy wants to contribute to those discussions, I hope and suspect he would still be very welcome to join.