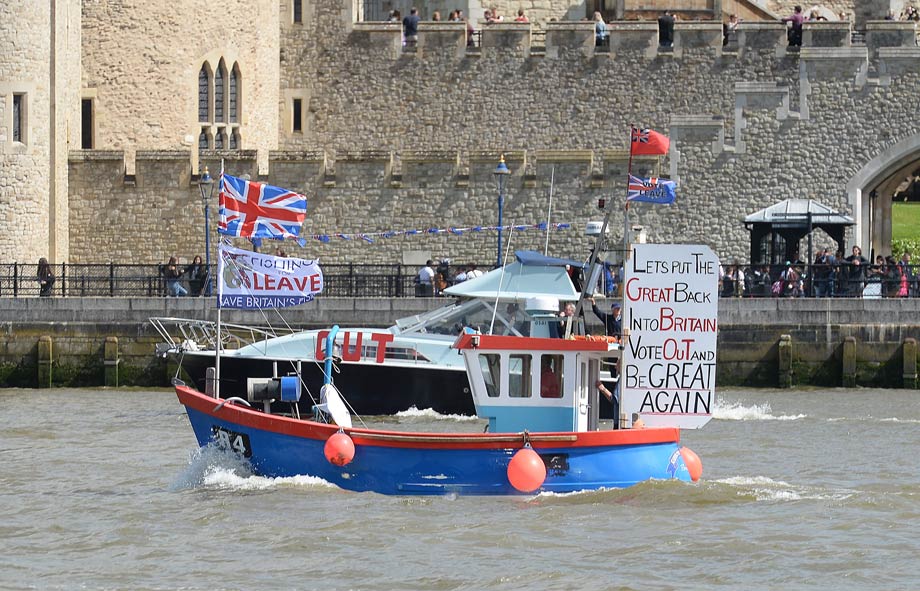 A boat forming part of a pro-Brexit “flotilla” makes its way along the River Thames in London on 15 June. John Stillwell/Press Association. All rights reserved.

Pop quiz: which UK industry is approximately equal in size to sewing machine manufacturing, yet claims to have swung the Brexit vote?

You may have guessed it – it’s the fishing industry. The vociferous complaints of loss of control, sovereignty and access to our waters and fish have become the symbolic talisman of the Brexiteers. But would people have felt the same way seeing Nigel Farage aboard a sewing machine, or a lawnmower – another economic equal?

There is no denying that the fishing industry has emotive power. But it is time to start asking the serious questions about whether Brexit could deliver real control for UK fishermen.

Let’s start with some context. According to the most recent EU level fisheries publication there are 6,552 fishing vessels in the UK (90% of fishing businesses only have one vessel), and the industry employs around 12,000 fishermen. Between them the vessels landed 758.8 thousand tonnes, worth just over a billion pounds in 2014. On average UK vessels land around 400,000 tonnes of fish each year in the UK, and between 200,000 and 300,000 tonnes abroad. The capture fishing industry represents less than 0.1% of UK GDP.

This interest in an industry that is worth less than a tenth of a percent of GDP, and only marginal in employment terms, is a result of the famous flotilla on the Thames and the use of the fishing industry to claim that the EU has ‘failed UK fishermen’. The talk of sovereignty and controlling our waters is very emotive stuff, and taps into the maritime heritage and island mentality of ‘bloody foreigners stealing our fish’. On top of that, the fishing industry has had its expectations raised, probably unfairly, by promises of ‘total control’, exclusion of other fishing fleets, and increases in fishing quota available to them. But can Brexit deliver? Is the fate of the UK fishing industry going to be the litmus test for a successful Brexit?

Before we think about Brexit, it’s important to understand six key points about the fishing industry:

With this context in mind, what could Brexit mean for the fishing industry?

The nationalist-utopian idea of exclusive access to British waters and larger quotas could in theory be a massive windfall for some. But the reality of this kind of confrontational approach not only threatens a re-run of the Cod Wars, but would also create barriers to the EU market which would cause huge concern among many in the industry. And then there is the threat of a crash in fish stocks through overfishing – something we know from recent memory would have very negative impacts on the industry and society as a whole.

We simply don’t know how the negotiations will run, what will be traded-off against UK fisheries and how access regimes will be agreed. But we do know that ultimately the only way the seas can be managed fairly is through co-operation between the different nations who fish them.

It’s easy to understand why UK fishermen resent the EU and the Common Fisheries Policy. The quota shares that the UK government agreed to on entering the EU were less favourable compared to the French, for example. The way that the UK government allocated its share of the EU total catch has meant the inshore fleet has had to throw edible fish overboard. UK fishermen want the fish stocks they have exploited for generations to deliver economic benefits to the UK coastal communities which so desperately need a boost. An optimistic view is fair enough, and small-scale fishermen in particular need something positive to focus on, but can and will UK coastal communities benefit?

As things stand, EU owned vessels accessing British waters have to fulfil one of four requirements:

Post-Brexit this could be reformed in various ways (e.g. tightening criteria to ensure fish is landed and processed in the UK – but this may require additional investment in port infrastructure), or even replaced with a landings tax which could be used to cover management costs, science or enforcement and get a public return to ensure a genuine benefit to UK coastal communities without having to resort to confrontational approaches or massive enforcement and legal bills.

Was Brexit necessary to push for a different allocation of EU quota shares?

Ever since the late 1970s the European Economic Community (EEC) has operated a policy called ‘relative stability’ which fixed shares of catches to reduce fishing pressure. This was agreed by all members, including the UK, and was based on historical catches, losses incurred through the establishment of exclusive economic zones (EEZs), and the needs of coastal communities highly dependent on fisheries.

However, dissatisfaction with these arrangements has grown as climate change and specialisation in fishing activity by different EU countries and fleets has caused significant changes to fishing stocks. There is a clear case to reform the relative stability policy (which took 7 years to negotiate in the first place) with what is called ‘zonal attachment’. Under this new approach, quota shares would be determined by the share of biomass of each stock within each EEZ, rather than the volumes of fish caught by each country over 30 years ago.

It’s worth noting that the UK could have pushed to reform relative stability from within the EU and Common Fisheries Policy (and they might have used their influence within Brussels to more effect) so a car crash Brexit is hardly a prerequisite for improving UK fisheries.

The UK would be reckless to unilaterally replace the Common Fisheries Policy with domestic law and dictate terms of access to EU vessels of EU Member States. Instead, agreeing a bilateral agreement with the EU is the best way forward. Research for the European Parliament’s Committee on Fisheries (PECH) suggests a preferential regime with EU Member States which currently fish UK waters would be necessary. If the UK fails to do this and pursues unilateralism, other countries could respond by saying that their access rights ‘trump’ UK domestic law. If this happens, there is a risk of starting the cod wars all over again, albeit this time in reverse, where the UK has to defend its EEZ from others. This is clearly a risk that the UK cannot afford to take, as the sea border for our 200-nautical-mile EEZ would be un-patrollable.

There have been moves towards copying the Common Fisheries Policy into the Great Repeal Bill, but according to legal experts this idea of ‘repatriating the CFP’ is delusional, as key EU legislation is so focussed on the commission, council and EU agencies that it would be easier to start from scratch, writing an entirely new policy as promised in the Queens Speech (in the shape of a Fisheries Bill / Act). Parliamentary approval, a devolution deal and systems and funding for science and enforcement will not be wrapped up immediately, so a transitional deal will be needed. Setting up meetings in Brussels and reaching that agreement now, rather than focussing on the Faroes and Iceland, would therefore seem a more pragmatic approach.

But with fishing not even on the Brexit agenda yet, we can expect more twists and turns over the coming weeks, months and, most likely, years.