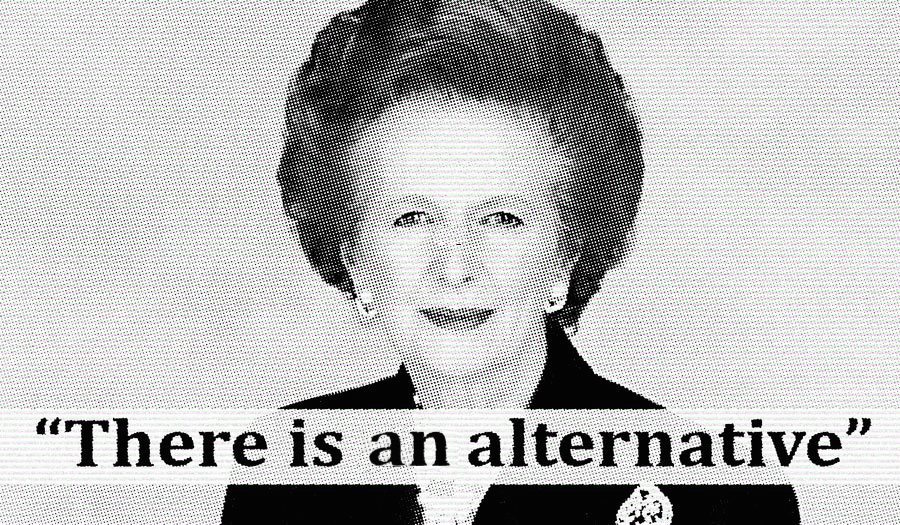 “The really fascinating battles in intellectual history tend to occur when some group or movement goes on the offensive and asserts that Something Big really doesn’t actually exist.”

So says Philip Morowski in his book ‘Never Let a Serious Crisis Go To Waste: How Neoliberalism Survived the Financial Meltdown’. As Mirowski argues, neoliberalism is a particularly fascinating case in point. Just as Thatcher asserted there was ‘no such thing as society’, it’s common to find economics commentators asserting that there is ‘no such thing as neoliberalism’ – that it’s simply a meaningless insult bandied about by the left, devoid of analytical content.

1. It’s only used by its detractors, not by its supporters

This one is pretty easy to deal with, because it’s flat-out not true. As Mirowski documents, “the people associated with the doctrine did call themselves ‘neo-liberals’ for a brief period lasting from the 1930s to the early 1950s, but then they abruptly stopped the practice” – deciding it would serve their political project better if they claimed to be the heirs of Adam Smith than if they consciously distanced themselves from classical liberalism. Here’s just one example, from Milton Friedman in 1951:

“a new ideology… must give high priority to real and efficient limitation of the state’s ability to, in detail, intervene in the activities of the individual. At the same time, it is absolutely clear that there are positive functions allotted to the state. The doctrine that, one and off, has been called neoliberalism and that has developed, more or less simultaneously in many parts of the world… is precisely such a doctrine… But instead of the 19th century understanding that laissez-faire is the means to achieve this goal, neoliberalism proposes that competition will lead the way”.

You might notice that as well as the word ‘neoliberalism’, this also includes the word ‘ideology’. Remember that one for later.

It’s true that the word ‘neoliberalism’ did go underground for a long time, with its proponents preferring to position their politics simply as sound economics than to admit it was a radical ideological programme. But that didn’t stop them from knowing what they stood for, or from acting collectively – through a well-funded network of think tanks and research institutes – to spread those ideas.

It’s worth noting that one of those think tanks, the Adam Smith Institute, has in the last couple of years consciously reclaimed the mantle. Affiliated intellectuals like Madsen Pirie and Sam Bowman have explicitly sought to define and defend neoliberalism. It’s no accident that this happened around the time that neoliberalism began to be seriously challenged in the UK, with the rise of Corbyn and the shock of the Brexit vote, after a post-crisis period where the status quo seemed untouchable.

2. Nobody can agree on what it means

Well, this one at least is half-true. Like literally every concept that has ever mattered, the concept of ‘neoliberalism’ is messy, it’s deeply contested, it has evolved over time and it differs in theory and practice. From the start, there has been debate within the neoliberal movement itself about how it should define itself and what its programme should be. And, yes, it’s often used lazily on the left as a generic term for anything vaguely establishment. None of this means that it is Not A Thing. This is something sociologists and historians instinctively understand, but which many economists seem to have trouble with.

Having said this, it is possible to define some generally accepted core features of neoliberalism. Essentially, it privileges markets as the best way to organise the economy and society, but unlike classical liberalism, it sees a strong role for the state in creating and maintaining these markets. Outside of this role, the state should do as little as possible, and above all it must not interfere with the ‘natural’ operation of the market. But it has always been part of the neoliberal project to take over the state and transform it for its own ends, rather than to dismantle or disable it.

Of course, there’s clearly a tension between neoliberals’ professed ideals of freedom and their need for a strong state to push through policies that often don’t have democratic consent. We see this in the actions of the Bretton Woods institutions in the era of ‘structural adjustment’, or the Troika’s behaviour towards Greece during the Eurozone crisis. We see it most starkly in Pinochet’s Chile, the original neoliberal experiment. This perhaps helps to explain the fact that neoliberalism is sometimes equated with libertarianism and the ‘small state’, while others reject this characterisation. I’ll say it again: none of this means that neoliberalism doesn’t exist.

Neoliberalism may not exist, says Conway, but what do exist are “conventional economic models – the ones established by Adam Smith all those centuries ago”, and the principles they entail. That they may have been “overzealously implemented and sometimes misapplied” since the end of the Cold War is “unfortunate”, but “hardly equals an ideology”. I’m sure he’ll hate me for saying this, but Ed – this is the oldest neoliberal trick in the book.

The way Conway defines these principles (fiscal conservatism, property rights and leaving businesses to make their own decisions) is hardly a model of analytical rigour, but we’ll let that slide. Instead, let’s note that the entire reason neoliberal ideology developed was that the older classical “economic models” manifestly failed during the Great Depression of the 1930s, leading them to be replaced by Keynesian demand-management models as the dominant framework for understanding the economy.

Neoliberals had to update these models in order to restore their credibility: this is why they poured so much effort into the development of neoclassical economics and the capture of academic economics by the Chicago School. One of the great achievements of neoliberalism has been to induce such a level of collective amnesia that it’s now once again possible to claim that these tenets are simply “fundamental economic rules” handed down directly from Adam Smith on tablets of stone, unchallenged and unchallengeable in the history of economic thought.

In any case, even some people that ascribe to neoclassical economics – like Joseph Stiglitz – are well enough able to distinguish this intellectual framework from the political application of it by neoliberals. It is perfectly possible to agree with the former but not the latter.

4. Yes, ‘neoliberal’ policies have been implemented in recent decades, but this has been largely a matter of accident rather than design

Privatisation, bank deregulation, the dismantling of capital and currency controls: according to Conway, these are all developments that came about by happenstance. “Anyone who has studied economic history” will tell you they are “hardly the result of a guiding ideology.” This will no doubt be news to the large number of eminent economic historians who have documented the shift from Keynesianism to neoliberalism, from Mirowski and Daniel Stedman-Jones to Robert Skidelsky and Robert Van Horn (for a good reading list, see this bibliographic review by Will Davies.)

It would also be news to Margaret Thatcher, the woman who reportedly slammed down Hayek’s ‘Constitution of Liberty’ on the table at one of her first cabinet meetings and declared “Gentlemen, this is our programme”; and who famously said “Economics is the method; the object is to change the soul”. And it would be news to those around her who strategized for a Conservative government with carefully laid-out battleplans for dismantling the key institutions of the post-war settlement, such as the Ridley Report on privatising state-run entities.

What Conway appears to be denying here is the whole idea that policymaking takes place within a shared set of assumptions (or paradigm), that dominant paradigms tend to shift over time, and that these shifts are usually accompanied by political crises and resulting transfers of political power – making them at least partly a matter of ideology rather than simply facts.

Whether it’s even meaningful to claim that ideology-free facts exist on matters so inherently political as how to run the economy is a whole debate in the sociology of knowledge which we don’t have time to go into here, and which Ed Conway doesn’t seem to have much awareness of.

But he shows his hand when he says that utilities were privatised because “governments realised they were mostly a bit rubbish at running them”. This is a strong – and highly contentious – political claim disguised as a statement of fact – again, a classic neoliberal gambit. It’s a particularly bizarre one for an economist to make at a time when 70% of UK rail routes are owned by foreign states who won the franchises through competitive tender. Just this week, we learned that the East Coast main line is to be temporarily renationalised because Virgin and Stagecoach turned out to be, erm, a bit rubbish at running it.

It may be a terrible cliché, but the old adage “First they ignore you, then they laugh at you, then they fight you, then you win” seems appropriate here. Neoliberalism successfully hid in plain sight for decades, with highly ideological agendas being implemented amidst claims we lived in a post-ideological world. Now that it is coming under ideological challenge, it is all of a sudden stood naked in the middle of the room, having to explain why it’s there (to borrow a phrase from a very brilliant colleague).

There are a number of strategies neoliberals can adopt in response to this. The Adam Smith Institute response is to go on the offensive and defend it. The Theresa May response is to pay lip service to the need for systemic change whilst quietly continuing with the same old policies. Those, like Ed Conway, who persist in claiming neoliberalism doesn’t even exist, may soon find themselves left behind by history.