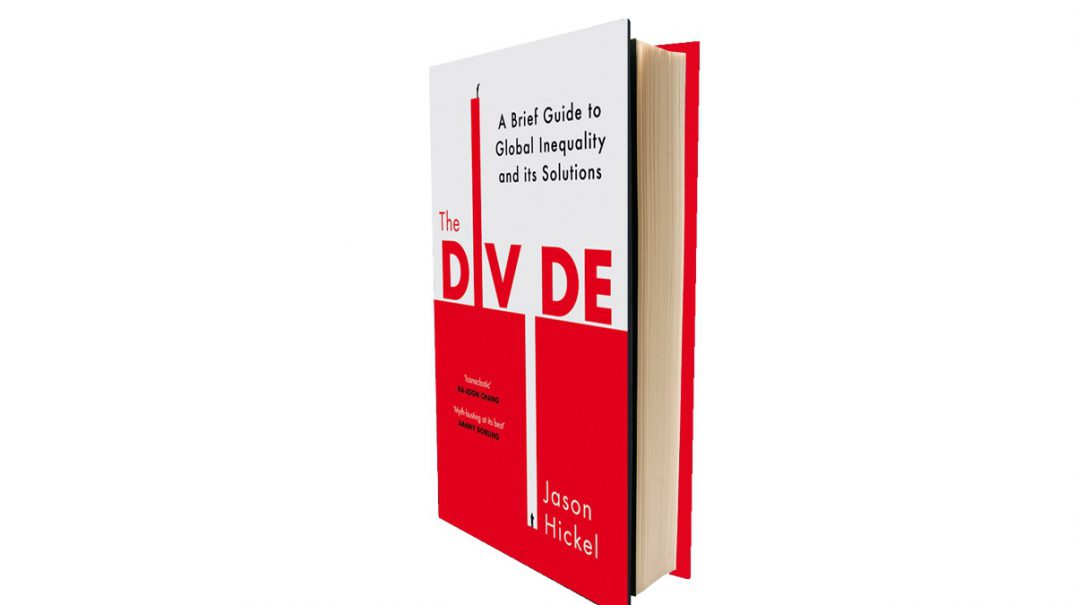 The word ‘tome’ gets bandied about all-too often. But in this case, despite claims on the cover to constitute a “brief guide to global inequality and its solutions”, tome really is apt. Jason Hickel’s The Divide is as weighty physically as it is intellectually.

And yet, fortunately, it is highly readable. I say ‘fortunately’ because this is a book that if our world is to have any chance of meeting the challenges of the 21st century, people need to read. It challenges so much received wisdom via a well-argued, flowing prose that guides you through economic history, international trade, colonialism, politics and power, and the limits to growth debate. In setting out the reality of global inequality and its tangled roots, Hickel, matador-like, destroys the statistical pivots used by official agencies and unpicks their portrayal of an optimistic account of the state of global poverty and inequality.

But The Divide is not just about statistics – it is about the political economy of today’s entrenched inequalities and why the economic model currently doing so much harm to people and planet exists.

Early pages share the story of how a writer for President Truman concocted the notion of ‘development’, almost as a space filler for a Presidential speech. This anecdote shows how much of the development agenda began in what almost amounts to a spin exercise. This is a brilliantly brutal call-out that somewhat undermines the original intentions of one of the most popular and ostensibly most virtuous causes of the 20th century, a cause that has galvanised political agreements, huge rallies, not to mention songs from well-known rock-stars.

From here Hickel challenges the implicit – arguably deliberately concocted – belief so many hold: that inequalities and the circumstances endured by the poorest are just a ‘technical’ challenge, solvable by governments in the global ‘South’ simply setting up the right institutions, picking the right suite of policies, eliminating corruption, and so on. An early knockout punch in the bastions of mainstream policy-making comes as early as page 3, where Hickel reminds us that:

“…in the year 1500, there was no appreciable difference in incomes and living standards between Europe and the rest of the world….yet their fortunes changed dramatically over the intervening centuries – not in spite of one another but because of one another.”

The chart on page 30 then summaries the crux of Hickel’s argument, showing the ‘annual gains from aid vs. selected outflows & structural costs/losses’. Spoiler alert: aid pales when compared to the multiple (and massive) flows in the opposite direction. This is one of those “if you only look at one chart this year, look at this one” charts. So much said in one diagram.

And from here the book takes the reader on a journey of the relationship between rich and poor countries. And one is left feeling it is one of the most toxic, abusive, manipulative relationships possible to imagine. Hickel forensically sets out the contours – the cuts and the bruises and the hectoring – of that relationship. And, crucially, the imbalance of power and profit inherent in it. On page 29 he writes:

“…the World Bank, for example…profits from global South debt; the Gates Foundation, which profits from an intellectual-property regime that locks life-saving medicines and essential technologies behind outlandish patent paywalls; and Bono, who profits from the tax haven system that siphons revenues out of global South countries.”

As is probably the way with any book anyone reads, there were some points where I wasn’t entirely nodding along. As someone who has spent a good chunk of my working life working for a large international NGO, I found the sweeping discussion of international NGOs and their work to be problematic. In pointing out (admittedly not unreasonably in some instances) how the communications of many NGOs entrench the ‘aid narrative’, the discussion skims over that so many of them campaign hard – and often effectively – against many dimensions of the system Hickel calls out as so insidious. Hickel does acknowledge this in an endnote, but I worry a reader who doesn’t diligently check every endnote would walk away with the impression NGOs are all working from the same mantra, one of heroic donor and grateful recipient.

This is far from the case and Hickel himself draws on evidence Oxfam collated about the extent of inequality and wealth hoarded by billionaires, something that would have been impossible if NGOs like Oxfam weren’t proactively identifying that the economic configuration is a root cause of poverty and suffering. Moreover, many solutions Hickel offers are bolstered by the work of NGOs. Jubilee 2000, for example, had huge NGO backing, as do the efforts to end tax dodging, mobilisation against inequality, and of course the fair-trade movement. Many of these feature in Hickel’s five key areas for change, areas more likely to see success with continued, and perhaps bolstered, NGO involvement.

As always, it is a matter of balance: help people survive the current system or change the system? I think there’s an urgent need for both. Helping people cope with the current challenges is vital, lifesaving work. Humanising the system is still worth it, anything else is cruel. But clearly, what is needed is also capacity and preparedness to look beyond supporting people’s immediate survival – and to call out the systemic reasons why so many people’s survival is in peril. These dual tasks may not necessarily be undertaken by the same people or even by the same organisation (and need not be covered simultaneously in the same book), but one without the other is not enough. Without the former people will die, and without the latter dying will carry on in the face of policies that should and can be changed.

So I am left hoping that Hickel’s next project might be helping craft a new lexicon, one to replace the increasingly redundant notion of development. For example, his penultimate chapter is called ‘from charity to justice’ – a nice contrast between the two fundamentally different concepts. One system preservation. One that requires system transformation.

The transformations Hickel identifies as most important in making that shift are debt resistance; global democracy; fair trade; just wages; and reclaiming the commons. These are as good a place as any to start (and others will of course have their own top five).

What’s needed to get there is mobilisation and political action, together with connecting and amplifying the work already underway (read here about the Wellbeing Economy Alliance, a new effort to do just that). This is a task that will be aided by the questions Hickel poses and the assumptions and orthodoxy he slays.