On the life of Robin Murray, visionary economist 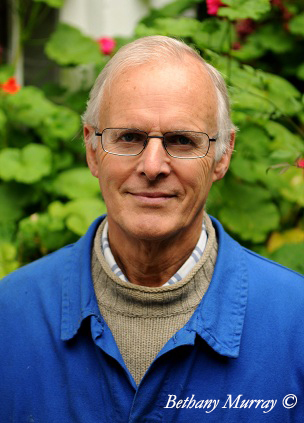 Robin Murray who died late on Sunday exuded vigour and hope. And he inspired those around him with his spirit. Maybe as a resuIt I find myself resisting the sadness which threatens to overwhelm me now that he is gone. The tears well, but they refuse to flow. He was not one for a passive response of any kind. The only respite is to ring common friends for mutual comfort: Stephen Yeo, the historian of the co-operative movement in which Robin had a passionate interest. Carlota Perez, whose far reaching theory of technological change and its connection with financial crisis he hugely admired and with whom he collaborated at the LSE. Mary Kaldor, the radical and original theorist of war and of movements for peace with whom he taught Marxist economics at Sussex university. “We didn’t always agree” she says, “but he loved debate”. My niece Jessi, who joined ‘Murray breakfasts’ after a swim at the London Fields Lido in Hackney for which Robin and his beloved artist wife Frances, campaigned after the nearby Haggerston baths were closed.

People and ideas, the lived and the meaning of life. Their connection was never lost in anything Robin did or said. Even as he lay breathless with the terminal lung disease which led to his death, and under firm medical advice not to talk too much, he could not contain his passion for both people and ideas. The energy of their relationship was his life force. He could not imagine living without talking about both, between sucking the means to do so from his oxygen machine. One evening’s topic were the ideas of Allende’s cybernetics advisor Stafford Beer and, more generally, the idea of the economy as a nervous system. At the same time, Robin’s starting point was always the health of the cell in its environment, the dynamics of the particular. He was forever fascinated by exemplary initiatives and how they worked, the conditions for their success. So, between breaths, the conversation would turn to the burgeoning Japanese consumer co-operative movement. Or to the co-operative shop in his original home county, Cumbria, to which even as his illness advanced, he devoted inordinate effort.

Above all, he was perennially fascinated by people’s personal stories, especially the stories of the young people in his family or helping with his care. The stories from his talented daughter, Beth and her Italian boyfriend Gianluca, of a visit to Gianluca’s olive growing family in northern Italy, and of exactly how his father harvested and sorted the olives. Or of how my niece Jessi proposed to her boyfriend in a tent during a hike across a Himalayan pass. “I asked her to describe the exact moment”. He said afterwards. He lived for the moment as his illness took hold. But his irrepressible curiosity about what moments were important for other people was, throughout his life, one of the qualities that made him so universally loved.

Our most thrilling moments together were when he was appointed to lead a small band of economic guerrillas who were brought into the GLC by Ken Livingstone in 1981; along with John McDonnell and the Chair of the Industry and Employment Committee, Michael Ward. Our brief was to draw up and help implement the London Industrial Strategy. Robin was a wonderful leader. He had the self-confidence to permit creative autonomy for diverse groups of us within the 70 or so strong Industry and Employment Department. At the same time he used the power of hierarchy to move against enemies of change – like the senior official who was determined to sabotage the Industrial Strategy in its early days. I led the Popular Planning Unit and although a few eyebrows were raised at our proposals – for example for the GLC to buy (unsuccessfully as it happened because of Tory government opposition) the Royal Docks in order to implement the People’s Plan for the Royal Docks (a community plan for an alternative to the City Airport) – Robin gave us constant encouragement. The politicians, Mike Ward along with Livingstone and McDonnell, won the space for new thinking. Robin was the ideal person to make full use of it and recruit a team to grasp every opportunity we could – and push them to the limit.

And what a team! Robin was immensely proud of colleagues like Mike Cooley, the brilliant design engineer who was one of the inspirations behind the alternative plan for socially useful production drawn up by the Lucas Aerospace Shop Stewards in the 1970’s. This in turn became one of the beacons guiding our work at the Popular Planning Unit. Sheila Rowbotham was another inspiring member of the team, who worked with women’s groups across London to draw up a London wide plan for child care – part of the innovative ‘Domestic Care’ section of the Industrial Strategy. John Palmer, ex-European Editor of the Guardian became the publicity director and a member of the board of the Greater London Enterprise Board (GLEB). Many more received a transformative, practical education: Geoff Mulgan, Ken Worpole, Marj Mayo, John Hoyland, Bob Colenutt.

With poetic licence, one could say we worked like a combination of a jazz band, integrating structure and improvisation and a guerrilla band, agile but with an unrelenting focus on the enemy: big corporate capital and the Thatcher Government (and sometimes, bureaucratic sabotage within County Hall). The guiding purpose was set out in the London Labour Party’s manifesto, whose radical principles we were employed to implement, and more important still, Robin’s overarching understanding of the transition underway in the capitalist economy in London as elsewhere – as the principles of Fordism faced crisis and challenge. He argued that the features that made for the Fordist goal of ‘economies of scale’ – standardised products, mass, flowline production, fragmented tasks controlled by management with little if any autonomy for workers creativity or discretion – were being abandoned under the pressures of workers revolt, demands for deeper democracy in state organisation and more differentiated, sophisticated consumer demand in favour of what he called ‘the economies of scope’. This meant a shift towards economies coming from an integrated product range from which customers choose their own basket of products. In the process, innovation and design becomes more important, and a flexible workforce becomes desirable. The post-Fordist bargain offered security in return for flexibility – in contrast to the Fordist bargain of high wages in return for obedience to the discipline of the production line.

But post-Fordism did not mean one single inevitable outcome of a skilled, well-paid and willingly flexible workforce. This is where Robin’s creative Marxism and his understanding of struggle and of a political choice came in. He saw it as choice between a Japan-style model, in which security in exchange for flexibility applies only in the small core of the economy and workforce flexibility on a widescale is achieved through mass insecurity. This was to lead on to the precariousness that is now all too prevalent within Thatcher’s post-Fordist world. Or, on the other hand, networks of social industrial institutions, decentralised, innovative and entrepreneurial, supported by a state organisations that plays the role of strategist, innovator, coordinator and supporter of producers, on the model of Northern Italy and parts of Southern Germany. Added to this, argued Robin, should be greater user/ community control and internal democracy in public administration to move away from a mass-produced administration towards a participative, responsive state.

Thus, whereas nationally the left response to deindustrialisation and the decline of Fordist manufacturing has been in terms of macro policy: devaluing the pound, controlling wage levels and expanding investment, with industrial strategy taking second place, Robin saw the opportunity of using the GLC’s considerable budget for investment and public purchasing and the land use powers and property ownership to develop exactly the detailed local industrial strategy which might expand the co-operative and social sector of the economy, creating skilled and fulfilling jobs and the local, targeted investment and integrated sectoral strategies which had worked well in regions of Northern Italy and Southern Germany.

It was in this detail that there was improvisation. Robin encouraged the various units of the Industry and Employment Branch to experiment with different kinds of intervention, collaborating as we worked. So, while in Popular Planning we worked with furniture workers developing their plans for the industry, others would be researching the trends in the furniture sector and yet others at GLEB, would be negotiating with furniture employers wanting investment funds; insisting with these employers that such funds were conditional on negotiating with the union over their worker developed alternatives. Had Robin been allowed to build on his strategy, London today would be a world centre not just of furniture design but of its manufacture.

In all this Robin’s understanding of the specific combined with his grasp of the theoretical meant that he could guide the implementation of strategy in a manner that was rooted in the actual relations of production in London in the early 1980’s. His was a rare and a precious practical intelligence and far-sighted mind.

He also thrived on actually having power, albeit the limited power of a large local strategic authority, to carry out the strategies on which previously he had only advised – as an academic at Sussex University’s Institute of Development Studies.

He also enjoyed a distinctive upper class confidence – without any hint of arrogance or presumption. He was the grandson of two members of what could be called ‘the dissenting posh’ Lady Carlisle a radical Quaker member of the Castle Howard aristocratic dynasty and the liberal classicist professor Gilbert Murray. He had been sent to Bedales – a co-educational boarding school for the progressive upper-middle class – with the egalitarian democratic ethos, and became head-boy. Frances was head girl and they formed a lifelong relationship.

At the same time influenced by the ‘spirit of ’68’ and active, again with Frances, in grass roots social movements  he had the social capacity and desire to make good a far-reaching political and strategic challenge. It was a potent combination. Together with Mike Ward he had no hesitation in challenging capital and bureaucracy wherever it blocked radical change, at the same time as opening the space for popular participation. Crucially, there was not an iota of paternalism, or presuming they knew what the populace were presumed to need. He set out on a path of socialism without Labourism and its upper class Fabian elitism. As Norman Tebbit said threateningly on the eve of the GLC’s abolition: “this is modern socialism and we intend to kill it”.

But it lives on. For it is not surprising that Robin’s four years of intense work, halted by Margaret Thatcher’s act of political vandalism in 1986, should have produced a wealth of ideas from which John McDonnell has been able to draw for Labour’s persuasive manifesto that just could on June 8th, finally put an end to neo-liberalism nationally as Robin’s London Industrial Strategy sought to defeat it in London.

This is just one way in which Robin’s legacy of hope will live on with us and through us. In the intervening years, to give just one example, his restless and inventive energy pioneered twin trading and created the Fair Trade network that supports tens of thousands of small farmers in developing countries. He lives on, he cannot but live on, and this is why, in spite of the sadness that this remarkable man with his indominatable spirit and generous enthusiasm is no longer physically part of our lives and no longer welcoming us with Sunday breakfast, tears will continue to well but not easily flow. Instead, his life and ideas continue to live.