Organising the workers whose jobs are made precarious by technology 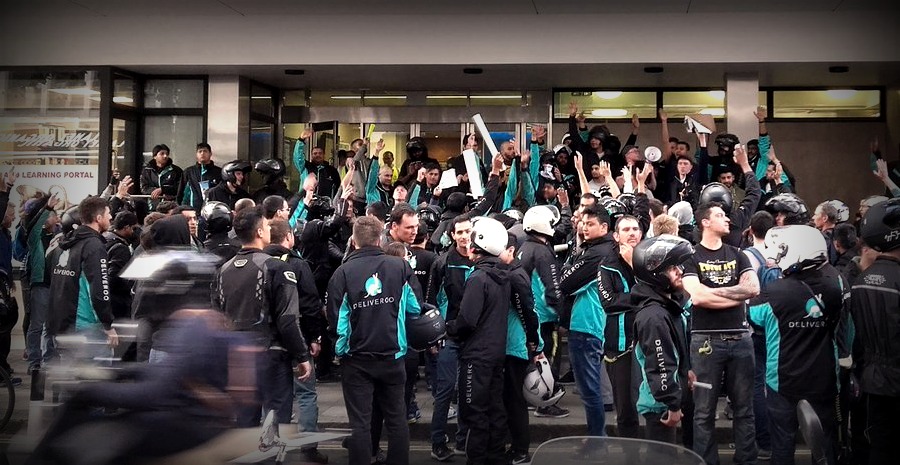 In early 2015, a group of bicycle couriers got together to work out how they could get a pay rise. They hadn’t had one in 15 years, while costs inflated by 58%, meaning a pay cut of over a third in real terms. In February of that year they joined the Independent Workers Union of Great Britain (IWGB) founding the Couriers and Logistics Branch (CLB). After 9 months of campaigning against CitySprint, London’s leading courier company, out of the blue drivers received notice of a 50p increase per delivery – a significant hike. CitySprint must have thought this would be the end of it. It was just the beginning.

“It’s nice to have a pay-rise,” Mags Dewhurst says, “but a lot of the problems in our industry are because of the bogus contracts that we’re on, and these contracts underpin all the layers of exploitation. We can be fired at any moment; we won’t get any holiday pay; and we’re still suffering the fluctuation of the supply and demand equation.” Dewhurst has just won a lawsuit against CitySprint. In a similar spirit to the ruling in last October’s case against Uber, or the recent success against Pimlico Plumbers, the judge ruled CitySprint’s classification of Dewhurst as an ‘independent contractor’ unlawful, and awarded her paid leave.

“If you look at their finances from 2008, their turnover has been increasing year on year by about 15%. You know, it’s meant to be a fucking recession,” Dewhurst says, pointing out that couriers’ work is hard, dangerous and important, with professional couriers often delivering such supplies as urgently needed chemotherapy. “You’re sitting there thinking, where’s the money going, because I’m working harder and harder, but earning less and less, and the company that I work for is defying all the financial stories that we’re told, about why we should accept less and why we should accept austerity, whilst my CEO gives himself a 55% pay-rise in 2013.”

The CLB employs a two-pronged approach, matching strategic legal action with on-the-ground campaigning, demonstrating a more dynamic, cooperative and horizontal model that responds to recent developments in the world of work than more traditional unions have proved able to initiate. As vastly more people file as ‘self-employed,’ there is an urgent need for innovative unions – forging alliances with coops, say, to more staunchly defend against precarity. They are, says IWGB Vice President Jon Katona, “moving at their own pace,” and Dewhurst’s recent win represents one ‘prong’ of this vision, which is picking up speed as Deliveroo IWGB-affiliated workers commence industrial action in Brighton, and now in Leeds with the Industrial Workers of the World, after a successful campaign in London last year. The IWGB is calling on the government to expand rights associated with worker status, and make it easier for claimants to access justice, since currently these contracts also prohibit workers from suing their (non) employer.

In Brighton, drivers supported by the likes of Labour’s John McDonnell and Green MP Caroline Lucas are to begin a high profile campaign after bosses at Deliveroo have refused to come to the table to discuss calls for a £1 pay rise per delivery. Though Deliveroo seemed to capitulate to a freeze on hiring, which was resulting in too many workers for too few jobs, they have refused to engage further. In a statement sent to drivers, they explained their hiring methods by saying, “when there aren’t enough riders at these peak times, resulting in delayed or unaccepted orders for customers, our system believes we require more help and begins to look for new riders in the area.” This means that the company recruits on the basis of demand at the busiest times, and means it is impossible for a courier to be fully employed the rest of the time.

Deliveroo have since sought to clarify this statement, denying that any freeze went on and telling openDemocracy they are “providing the well paid, flexible work which riders want.” This serves to obscure the reality that the majority of workers in the courier industry are in already precarious positions, and fails to interrogate why it might be that the gig economy more broadly employs a disproportionately immigrant workforce, people who are compelled to take up casual work because of the systemic racism which denies them more stable employment. Deliveroo also told me it doesn’t recognise any of this as industrial action since “the IWGB doesn’t represent our riders” – odd since its drivers have signed memberships – in a bid to double down on their status as independent contractors.

The union began by representing underpaid cleaners, invariably migrant workers, at London universities in 2012, and has most recently established a branch for foster carers. Campaigns such as Justice for Cleaners at SOAS university and the 3 Cosas campaign splintered from larger unions and reformed under the banner of the IWGB. “A lot of people are Polish in the courier industry, or Brazilian,” Katona says. “It’s a fact of the type of work that this is, because it’s low-wage, low-security, low-prospect. It’s the sort of work that’s more available to people who… are already vulnerable. They don’t have the same chances of securing financially secure and stable jobs, so this sort of precarious work is something they end up falling into.”

Deliveroo’s description of their system – and their stated refusal to curtail it – also betrays the workings of a more pervasive and deliberate strategy on the part of similar platforms to shirk responsibility for workers’ livelihoods: to falsely present the degradation that results from a ferocious capitalist business model as the unavoidable fluctuations of efficient technology which simply tries to give buyers and sellers what they want. These platforms profit from the ‘smart’ economy by exploiting and compounding existing precarity.

Workers and the public interface with companies which cultivate a futuristic image, set to ‘disrupt’ value networks and expand exponentially to conquer new markets, unleashing a tide of consumer convenience that can’t be turned back. The rapidity with which these companies scale up is only possible, as Dewhurst points out, because they don’t have to cover basic infrastructural costs – of vehicles, holiday pay, sick pay or national insurance. The same logic enables them to throw their hands up – “we’re just a tech company” – and defuse the political connotations of being a worker by casting employees as entrepreneurs who get a kick out of being their own bosses.

This myth of irrepressible technological advancement feeds off the great neoliberal chimera that markets must be allowed to abide by their own laws, shown up for its true nature when governments rushed in to shore up the financial system in the 2008 banking crisis, as Will Davies, among others, has argued. Instead, say groups like the IWGB, here is exploitation old as time – with a shiny new face: “the technology allows them to keep the workers at arm’s length, so that they can hide behind this idea that an algorithm is controlling it,” Katona cautions. But it’s this same distance that has so far enabled workers to organise themselves to great effect.

It’s for the rest of us to resist a culture which continues to sanctify corporate greed and consumer convenience at any cost. Innumerable services are being skimmed in this way, and we should be mindful that technology has created new scope for labour to be undercut right down to the bone. Automation could herald a world beyond work, but not under current arrangements of eroding social protections and a lack of decent regulation for evolving markets. Unions like the IWGB and those in a-to-b industries are at the forefront of challenging this onslaught, but shorter contracts, piecemeal payment and absent protections are on the rise across the board. These companies don’t care about their employees – but they do care about their public image and their profit margins. Keep track of their attempts to wriggle out of these basic requirements; things can get worse.