Precarious workers are organising – trade unions need to catch up 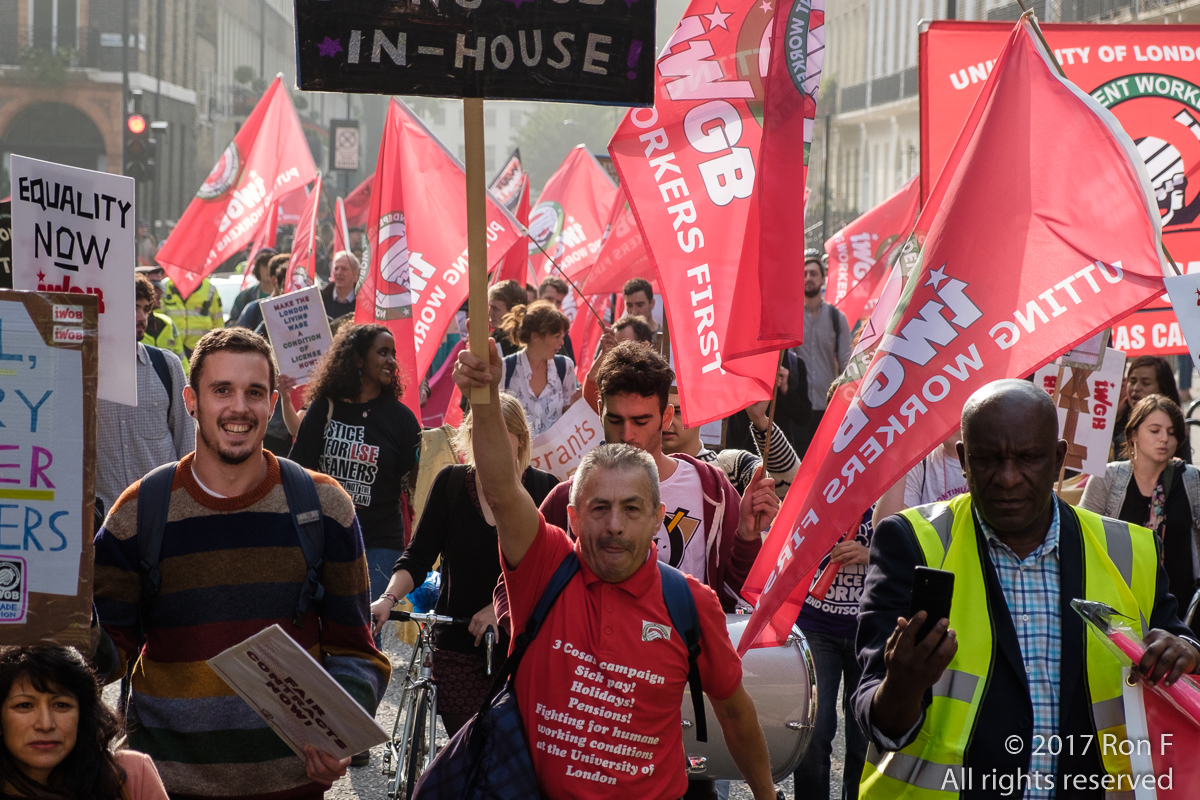 It wasn’t long after he joined Uber in 2013 that it became clear to Yaseen Aslam – a ten-year veteran in the minicab trade – just how vulnerable he was if he didn’t team up with other drivers.

“For me it was about how Uber could turn me off at the touch of a button and just fuck my life up” he says.

Back then there were no unions with a strategy to help workers such as Aslam, so without any resources, except for his own time and knowledge of the trade, he launched his own driver association, The London Private Hire App Driver Based Association.

Move the clock forward to last month, and Aslam was marching side by side with hundreds of other workers that like him face low pay and poor conditions. Deliveroo riders, cinema workers, cleaners and others accompanied Aslam and fellow claimant James Farrar, as they went to face Uber at an employment tribunal for a second time. In the space of a few years, the debate around precarious work is increasingly taking centre stage, however, the trade union movement, with a few exceptions, is lagging behind.

Both Aslam and Farrar are members of the small, but rapidly growing, Independent Workers’ Union of Great Britain (IWGB), whose members are largely  precarious workers, from cleaners to couriers.

Different reports put the total number of the UK’s precarious workers – those who are easily replaceable and thus highly vulnerable to exploitation by their employers – at somewhere between 3.2m and 10m. What all these reports agree on, is that this number has been growing.

Besides the IWGB, only a tiny handful of unions are putting any resources in organising precarious workers. These include the equally small United Voices of the World (UVW), which focuses on low-paid migrant workers, the Bakers, Food and Allied Workers Union (BFAWU), whose members recently led the UK’s first McDonalds strike, and a few branches at Unite, the UK’s largest union. 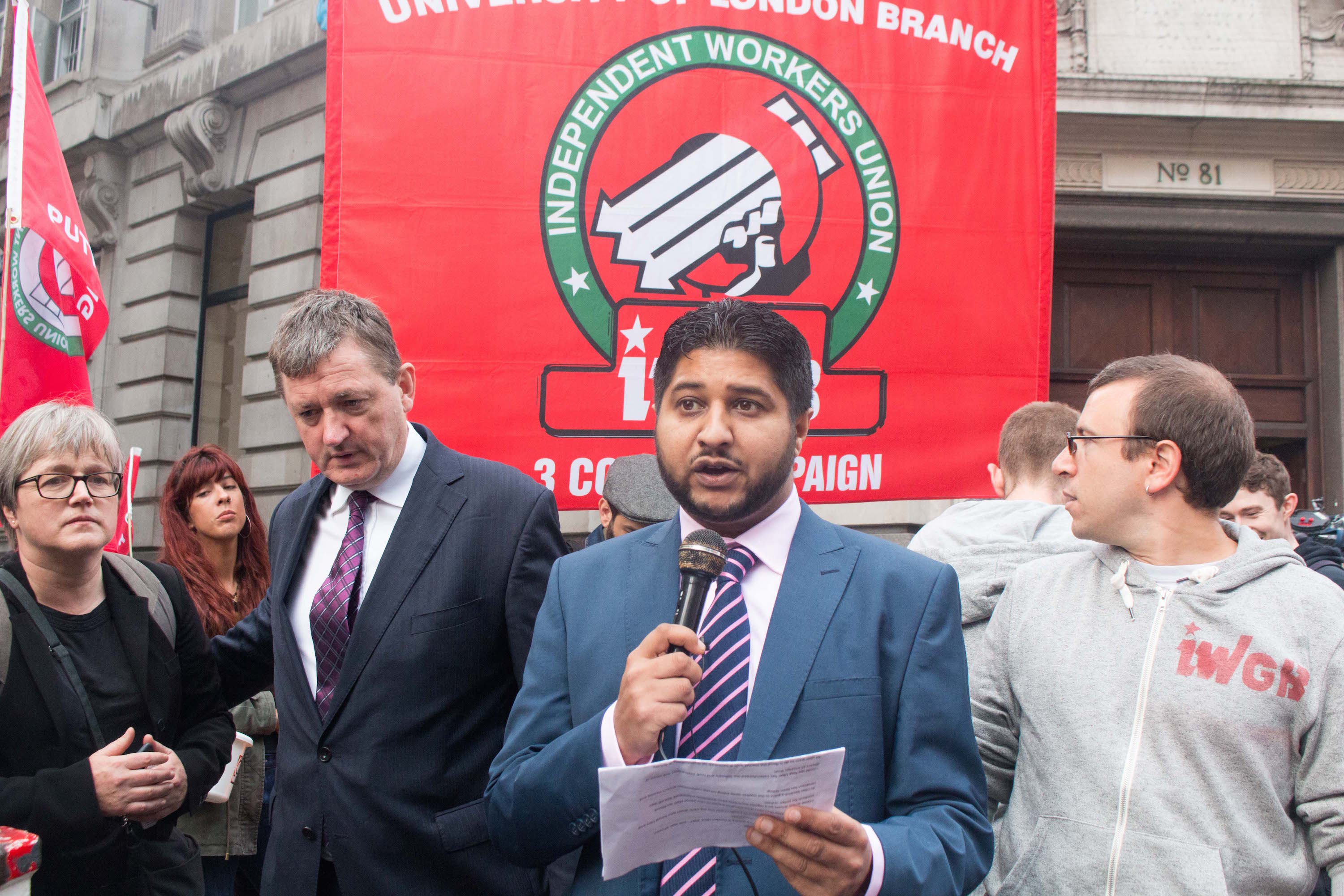 It’s clear when looking at membership numbers the extent to which the trade union movement has abandoned these workers. You are less likely to be in a trade union if you are a migrant, if you are low paid, if you don’t have a degree and if you aren’t in a professional occupation.

They’ve been left behind because the majority of unions in the UK, while they might not say it publicly, don’t believe precarious workers can organise and win, says Dr Jamie Woodcock, a research fellow at the London School of Economics, who has researched work and resistance at call centres and more recently Deliveroo.

“They feel they would invest more than what they would get out of them… instead they are stuck managing their decline,” he says. This decline is characterised by a focus on their existing membership and in their core sectors, many of which, notably the public sector, are facing a dramatic reduction in the total workforce.

Consequently, parallel to the massive rise in precarious workers, we are seeing a shrinking and increasingly older union membership, as around 39.1% of trade union members are 50 or older, while fewer than 5% are 24 or younger.

But while many in traditional unions might feel organising precarious workers is a waste of time, recent experience is proving the opposite.

There is the case of bicycle couriers organised by the IWGB, who against all odds won an average 25% pay rise in five workplaces through a campaign that lasted just over a year. Or the cleaners at the London School of Economics (LSE), who earlier this year became the first in the UK to force an institution to end outsourcing and hire all its cleaners directly, just to name two.

These victories aren’t significant just because they were unprecedented, but also because the unions that led them were dramatically under-resourced. The strength of these campaigns didn’t come from having a multi-million pound budget, political connections in the Labour front-bench and a well-staffed PR department, but from the commitment of the workers and their unions to fight and take radical action.

“It came down to the sheer determination and level of organisation of the cleaners, backed up by a union that was willing to support them as long as they wanted to take action,” says Petros Elia, General Secretary of UVW, the union that organised the LSE cleaners.

While train drivers can strike and significantly impact the running of the service and the business behind it, most precarious workers don’t have the same leverage. Cycle couriers, while they are currently gaining  rights through a number of legal challenges, at the time were being employed as independent contractors and had no formal employment rights. Striking cleaners, on the other hand, can easily be replaced by zero-hours workers that are on their employer’s books or by an agency worker.

This is what happened at the LSE, so in order to win the cleaners needed to amass significant support from other workers and the wider community

“If you don’t have a good network of motivated workers or supporters ready to take direct action then you won’t defend striking workers,” Elia says. “One of the things UVW and IWGB offer workers besides prospects of winning real gains, is a sense of community and space, and that is large part of the reason why workers join and stay.”

Anyone who went to one of UVW’s pickets outside the LSE could attest to the carnivalesque atmosphere, where on any given day you could stumble across a zumba class or a lecture on how pirates got sick pay. The protests were loud, noticeable and most importantly fun for those that wanted to get involved.

In the case of the bicycle couriers campaigning in 2015, despite working for many different companies, up to a hundred got together to target a single employer. It was an unprecedented level of unity – imagine workers from Tesco’s, Sainsbury’s and Morrisons all teaming up to jointly campaign against one supermarket.

One company in particular, CitySprint, dominated the market and was imitated by all of its competitors. If the couriers were able to bring it to heel, then it would be much easier to pressure the others, says Maggie Dewhurst, one of the couriers that led the campaign and who is now Vice-President of the IWGB.

“The protests were loud, noticeable and most importantly fun for those that wanted to get involved.”

And the strategy worked. After campaigning for nine months against CitySprint, they won a rate rise. This was followed by campaigns against eCourier and Mach 1, which lasted four and three months, respectively. In the interim, two other companies that were on the couriers’ radar, Addison Lee and Excel, raised their rates after seeing what was happening to their competitors.

“Because it [the campaign] was so successful, we could use it as a threat to the other companies to force them to put their rates up as well,” Dewhurst said.

What also set this campaign apart, was that besides targetting the companies themselves, much of the focus was on the company’s clients.

“It’s very important for them to maintain contracts with big corporate clients… so they are very susceptible to disruption by attacking their clients,” Dewhurst said.

The couriers protested and occupied the lobbies of Citysprint clients, such as Google and corporate law firm Linklaters, early in the morning, when people were coming into work. This was the time when a protest of that kind would be most visible and cause the most disruption. 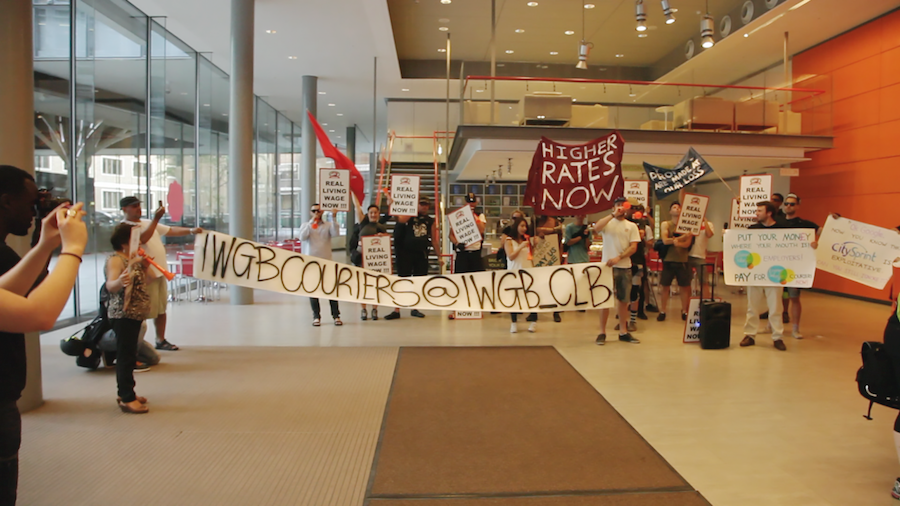 Dewhurst suspects that Linklaters, a partner of the living wage foundation, ended up pressuring CitySprint to enter into negotiations with the union.

These victories could seem relatively small, with little potential to have a wider impact. However, it was precisely a strategy of combining worker and community solidarity with direct action that not only won a pay rise for McDonald’s workers in New Zealand, but managed to turn the dial on the debate around zero-hours contracts to the extent that they were banned by law.

“You talk to their organisers and they talk about creating chaos,” said Gareth Lane from BAWFU who helped organise the UK’s first strike of McDonald’s workers last month. He says that in New Zealand, besides having worker strikes, students went on strike and occupied McDonald’s stores, shutting them down.

The challenge that remains in the UK is to get larger unions to start organising precarious workers, while also allowing these workers to have ownership over their campaigns. Unite, which has the largest organising department in the UK, with approximately 120 organisers, doesn’t organise outside its core sectors, but there are glimmers of hope.

Earlier this year around 700 outsourced workers organised by Unite at Barts Health NHS Trust in London led the largest cleaners’ strike in UK history. After 24 days of industrial action, the workers were able to secure pay rises, concessions on workloads and job cuts, and a commitment by the employer, Serco, to stop hiring people at the trust through zero-hours contracts.

“The challenge that remains in the UK is to get larger unions to start organising precarious workers, while also allowing these workers to have ownership over their campaigns.”

And while many within the larger unions still push for what is called a service model – a union that provides legal service, health insurance and other services – others understand that the only way that the trade union movement will survive is through organising workers, particularly precarious workers.

“This isn’t just a flash in the pan,” says a Unite insider, “There is a realisation in Unite that we are going to die if we don’t reverse the decline in our membership and the lack of power in the movement.”

Even if these unions aren’t willing to look outside of their traditional sectors, years of austerity and deregulation mean that a growing number of precarious workers fall inside the remit of the larger unions such as Unite and Unison.

In fact, within many of these more established unions there are a small but growing number of campaigns that are being pushed from the ground-up, by the workers themselves. From striking British Airways Mixed Fleet, to the Picturehouse cinema workers and teaching assistants in Durham, the most high profile battles taking place at the moment involve precarious workers that previously had little or no involvement in trade-unions, but have become radicalised after months of struggle.

If there is some hope for the union movement to put precarious workers at the centre stage, it could come from a shift in culture brought about by these fights.

“The ground is so fertile for organising at the moment,” says Lane from BFAWU. “Workers wherever we go are ready to organise. If big unions put resources into it, it would explode.”