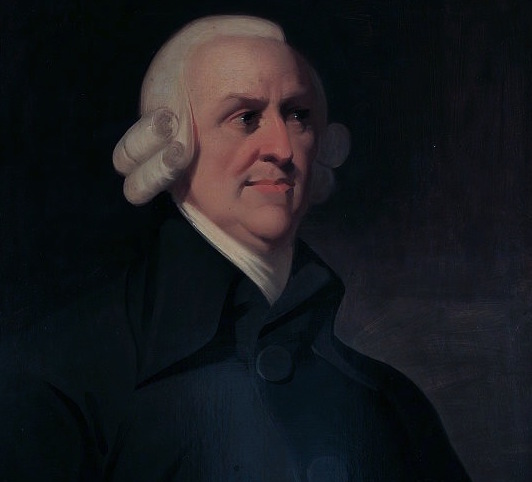 Smith’s warnings about unchecked corporate power backed by the state should be heeded today.

Some of the United Kingdom’s conservative political thinkers were often surprisingly radical. Edmund Burke, for example, is regularly and favourably quoted by Tory MPs who claim him as the “father” of their movement – a view drawn mainly from his prescient “Reflections on the Revolution in France”, which foresaw “massacre, torture, hanging” and “laws… supported only by their own terrors.”

But the “reactionary prophet”, as Christopher Hitchens described him, also condemned the “absolutely incorrigible” East India Company, sympathised with the treasonous American revolution, and even spent seven years trying to impeach Warren Hastings, the first Governor General of British India. “It is one of the ironies of history”, writes Mithi Mukherjee, “that while Burke, who has been characterised as a leading conservative thinker, sought to defend the rights of Indians against the arbitrariness of the colonial state, it was leading liberal intellectuals like James Mill and John Stuart Mill, who resolutely defended the absolutist nature of the East India Company’s government.”

Every tax is a badge of liberty

Although this side of Burke is frequently forgotten, he has at least avoided the fate of Adam Smith – the towering figure of the Scottish Enlightenment who has been widely presented, well after his death, as the founder of laissez-faire economics.

For instance, the UK-based Adam Smith Institute, which was formed in the 1970s “to promote free market, neoliberal ideas”, describes Smith’s work – particularly the Wealth of Nations (1776) – as “the intellectual foundation of the great nineteenth-century era of free trade and economic expansion.” Smith “realised that social harmony would emerge naturally as human beings struggled to find ways to live and work with each other. Freedom and self-interest need not produce chaos, but – as if guided by an ‘invisible hand’ – order and concord.”

Yet, while self-interest and free markets have become synonymous with Adam Smith in almost every economics textbook, his contemporaries didn’t see it this way. Jeremy Bentham’s letters to Smith – published as Defence of Usury (1867) – strongly criticised his support for laws limiting the rate of interest on loans, which were aimed at preventing damaging speculation by “prodigals and projectors.” And although Smith’s modern followers enjoy quoting his criticisms of clumsy government taxation (“There is no art which one government sooner learns of another than that of draining money from the pockets of the people”), one of the Scotsman’s first public interventions after the Wealth of Nations was to recommend two new taxes to the Chancellor of the Exchequer in the budget of 1788. This is not surprising from a man who wrote that “every tax is to the person who pays it a badge, not of slavery, but of liberty. It denotes that he is subject to government, indeed, but that, as he has some property, he cannot himself be the property of a master.”

If this is a long way from the libertarian view of “taxation as theft”, then Smith drifts even further from his modern followers on the question of “self-interest.” To him, “all for ourselves, and nothing for other people, seems, in every age of the world, to have been the vile maxim of the masters of mankind.”

Smith reserved some of his most strident criticisms for “joint-stock companies” like the South Sea Company, East India Company and Royal African Company which were able to establish monopolies over foreign markets with the imprimatur of Royal Charters. “The directors of such companies”, he wrote, “being the managers rather of other people’s money than of their own”, were inevitably disposed towards “negligence and profusion.” “Such exclusive companies are nuisances in every respect; always more or less inconvenient to the countries in which they are established, and destructive to those which have the misfortune to fall under their government.”

The British Empire on which these companies were dependent now only exists in the mind of the International Trade Secretary, but Smith’s warnings about unchecked corporate power backed by the state remain relevant. Indeed, the most powerful corporations and industries in modern Britain more closely resemble the “exclusive companies” derided by Smith than the independent and enterprising wealth creators idealised by “neo”-liberals.

A good example is the arms industry – one of the few areas of global trade where Britain is undoubtedly a leader. Arms companies like BAE Systems and Rolls-Royce have received significant public support in the form of export credit guarantees – whereby a government agency (UK Export Finance) insures them against buyer default – or more directly in the form of large chunks of Research and Development funding, well out of proportion to the amount of employment that they provide. Between 2008 and 2011, over a sixth of the UK’s R&D funding was devoted to defence, “a fraction that is about three times higher than that of the major industrial nations of Germany and Japan.” Moreover, when these companies get into legal trouble, governments have been willing to make sure that the rule of law doesn’t get in the way of their business interests.

While the taxpayer underwrites this largesse, poor countries are saddled with debt from corrupt British arms deals or killed by British weapons. “Inconvenient”, indeed, to us; and “destructive” to them.

Other dominant areas of the British economy – such as real estate and finance – have also been enabled by the very visible hands of both Conservative and Labour governments: subsidies for mortgages, tax breaks for landlords, multi-billion pound bank bail-outs, and, again, political shelter from the law.

Adam Smith, though writing before the main “take-off” of modern capitalism, feared this kind of cronyism. He knew that “people of the same trade seldom meet together” without the conversation ending in “a conspiracy against the public”; and that “whenever the legislature attempts to regulate the differences between masters and their workmen, its counsellors are always the masters.”

Drawing on arguments like these – which appear in the Wealth of Nations and at times in The Theory of Moral Sentiments (1759) – the Oxford Politics Professor Ian McLean recently went so far as to declare Adam Smith a “radical and egalitarian.”

This might be a stretch. Smith strongly defended private property and was what we would call a “fiscal conservative” (“What is prudence in the conduct of every private family can scarce be folly in that of a great kingdom”). He was very much a “classical” liberal in the sense of believing in gradual, well-ordered progress. “Commerce and manufactures”, he wrote, “gradually introduced order and good government, and with them, the liberty and security of individuals… who had before lived almost in a continual state of war with their neighbours and of servile dependency upon their superiors.”

The Wealth of Nations is not a manifesto, and so it is not always easy to find clear policy proposals in Smith’s writing. But his distaste for “exclusive companies”, “scheming monopolists”, and “prodigals and projectors” is a constant theme in his magnum opus. As John Kenneth Galbraith put it: “Corporate executives and their spokesmen who cite Smith today as the source of all sanction and truth without the inconvenience of having read him would be astonished and depressed to know he would not have allowed their companies to exist.”

If Galbraith was exaggerating here, he was almost certainly right in saying that “many people who now yearn to resurrect Smith will find him a scathing enemy if they succeed.”