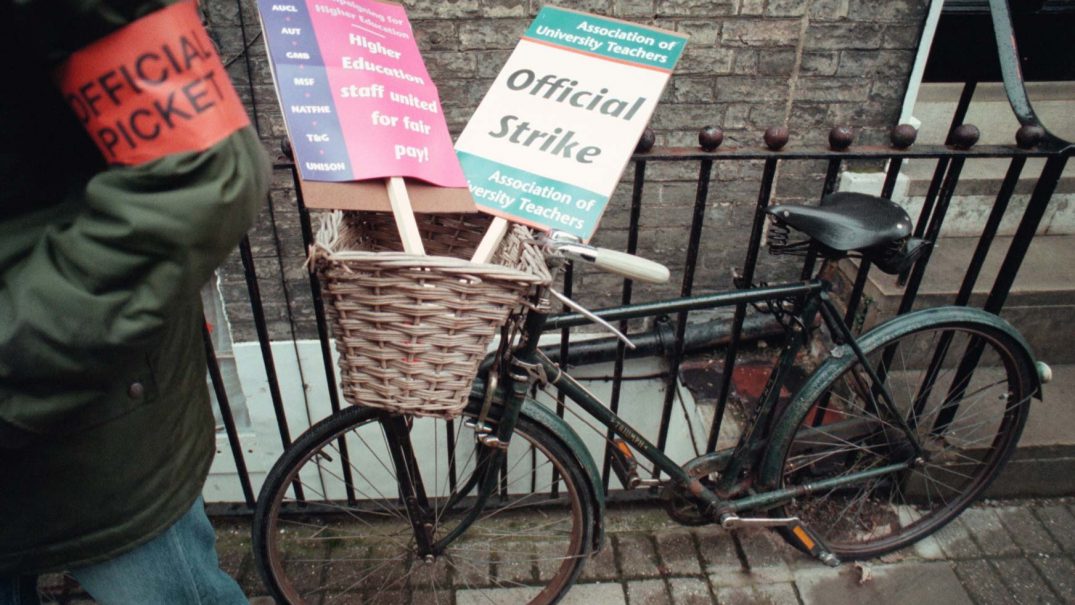 A higher Education teacher stands on the picket line at Cambridge Universitie this morning (Tuesday). Teachers all over the country are have staged staged a one- day strike over pay. Picture by Stefan Rousseau/PA. See INDUSTRY Universities

The Brexit campaign saw much pontificating about the need to free UK businesses from the yoke of workplace regulations and union protections, in order to ‘make Britain competitive’. This reliably translates to ‘allow business to suppress wages’; making Britain’s workforce low paid and malleable enough to attract transnationals to set up shop here. This is supposed to create investment, which creates jobs, which creates demand, which stimulates investment, and so on. The logic goes that wages are a cost to businesses, so an upwards pressure upon them begins to look a lot like a threat to those tantalising profit margins intended to attract investment. This enlightened progress towards poverty salaries can be thoroughly derailed by union action. Unions are after all one of the – if not the singular – most important forces in gaining and defending wage rises. Workforces and industries with greater union density have consistently higher wages; like herd immunity, it’s a benefit reaped even by those individuals who don’t happen to be unionised themselves.

If unions are a threat to the economy, then gutting their legal protections amounts to a defence of the public interest. In this respect, public interest has been very thoroughly and rigorously defended over the past few decades. The impact of collective bargaining has been weakened by a steady rollback on legal protections surrounding, making it more and risky to organise – combined with heavy police crackdowns on union action. Union density has halved in the last thirty years. If this was meant to allow wages to fall, it has worked like a charm. As a percentage of national income, wages have fallen by 8.9% compared with their peak in 1975. Since the start of the most recent financial crisis in 2007, the UK has enjoyed a real-terms fall in wages of over 10% – second only to Greece. In fact, wages have been so successfully shrunk that it’s a little mystifying why the economy, according to this rationale, is far from flourishing, and worker productivity is actually falling.

We must re-evaluate how we think about wages. They aren’t just a burdensome cost to businesses, to be avoided as much as possible. They are also the basis of demand. They largely provide the money people use to pay rent, buy food, heat their houses. They provide money we use to buy mini-scooters and electric toothbrushes and magazine subscriptions and all the other products whose manufacture, distribution and sale forms a fundamental part of the economy. If wages are squeezed, then people have less cash to spend on consumer goods and services. Whilst squeezing wages might be a good idea for any one business, for businesses in general it’s a recipe for disaster: they are essentially competing to gut their demand base. Indeed, this pattern obtains across Europe. With a common currency and tight controls on fiscal policy, wage suppression is one of the most readily available ways in which countries can pursue a competitive advantage over their neighbours, trying to make workers more productive per euro spent on their wage packet. It’s rapidly becoming a race to the bottom; with countries competing to pay people less, for harder and longer work days. Countries with a trade surplus, exporting more than they import, are less dependent on the wage packets of domestic workers to secure a basic level of demand. But if these countries trigger a race to the bottom – well, it means that foreign wage packets are diminishing too. There are few winners.

If we strengthen collective bargaining, we bolster the power of trade unions to act as a bulwark against this mutually assured stagnation. If we roll out strong legal protections around union action, we can increase the power of unions to effectively demand wage rises. Moreover, by rebalancing the amount recouped in wages by low-income workers, we can ensure that wages do the most work in stimulating demand. If you give someone on minimum wage fifty quid, they are almost guaranteed to spend it – not through some inherent profligacy, but simply because they need that cash. If that same fifty quid is paid as a dividend to a CEO – someone who most directly benefits from rising profits – it’s much more likely either to be saved, or to be driven into unproductive investments (like, say, inflating the cost of houses).

It also acts as a check on the enormous amount that the government shells out to plug the gap between inadequate wages and the rising cost of living. When people depend on welfare to scrape by, make it to work the next day, and keep the company running, welfare payouts amount to a massive public subsidy to businesses and landlords. This isn’t a magic bullet – the point of trade union action is not to save capitalism from its own caprices. But it’s a step towards rebalancing the distribution of economic power in our country, and stemming the collapse in living standards that threatens the real ‘wealth-creators’ with precarity and penury.