To tackle inequality, we must first understand the exploitation that creates it 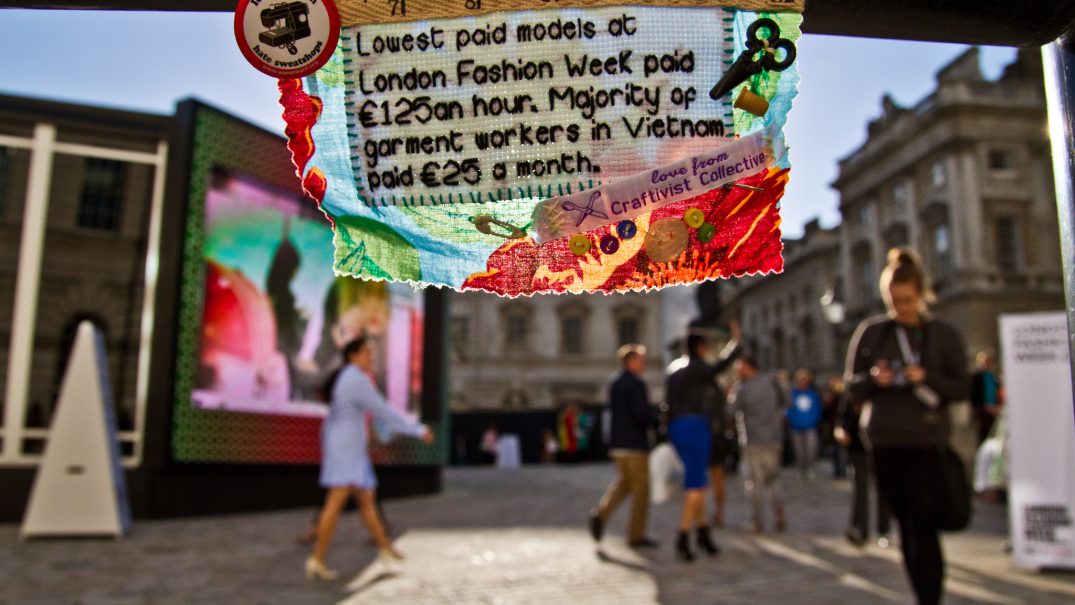 Leicester, May 2018: textile workers are paid half the minimum wage, their actual worked hours halved to fiddle the figures. The clothes they produce are sold by a new breed of on-line, “fast fashion”, retailers selling to “aspirational thrift” consumers with limited spending power. The workers themselves are mostly non-English speaking or recent migrants from Asia or Eastern Europe. From poor wage workers to poor consumers. And the retailers themselves are doubling profits year-on-year.

You could call it nineteenth century exploitation in the 21st century. So, why do we need a new theory of exploitation, when surely Marx will still do, 150 years later? Well, no.

Even this small example of ‘dark factories’ asks for some rethinking, let alone other major historical transformations in the modes of making profits and the organisation of political economies. Both the existence of a minimum wage and its illegal evasion point to the significance of law in constituting and legitimising the exchange between wage labour and capitalist enterprises. Then, asymmetries of power in exchange run through every aspect of fast fashion: between the retailers as the dominant power and manufacturers, between manufacturers and their workers, and between retailers and their consumers. There is a churning of manufacturers, going in and out of bankruptcy. The consumers, mostly the in-work poor, locked-in to buying the cheapest available fashion items, pay the price of profit at margins hidden from sight. The workers, non-unionised, without high levels of education, migrant and ethnic minority, are constrained in varying degrees of economic powerlessness to sell their labour at below the legal rate to which they are entitled.

Together with my friend, the Marxist political philosopher, Norman Geras (now sadly deceased), we decided to go back to basics and do some necessary rethinking. We wanted to go forward from Marx to address the rampant and extreme inequalities that have emerged within national economies. We wanted to challenge the democratic illegitimacies (plural) of economic power, how economies as they have been politically constituted by law enable the undemocratic concentration of economic power and its exercise. There are extreme undemocratic rights to the wealth created in society, both public and private.

In a major historical transformation, not yet present for Marx to analyse, universal compulsory education has progressively, and to different degrees in different societies, fundamentally changed the social reproduction of labour, the capacity to work. Feminist economists long ago rightly insisted on the unpaid, non-commodity, process of reproduction in the household. Educational systems supplemented such processes on an ever increasing scale as school leaving ages were gradually raised. The theoretical significance of this transformation for a revision of 19th century Marxism cannot be understated – let alone ignored.

Four main points can be made and briefly stated.

First, children are constrained not to sell their labour until a certain age. That changes the whole shape of the labour market. And it is a political and legal condition of who can and who cannot sell their labour.

Second, the model of a closed-circuit commodity system of labour and commodities has to be abandoned. Social reproduction of labour is no longer only secured by the consumption of a basket of commodities – food, clothing, housing and an increasing range of goods deemed ‘necessary’ for social life. It also requires the work of teachers and school students to acquire skills at different levels in a non-commodity public mode of reproduction. You cannot equate or quantify this non-market teacher and student labour with the market labour engaged in producing commodities.

Third, the fundamental polarity underpinning Marx’s conception of class has to be radically revised. The binary division between owners of the means of production (when means of production are equated to market assets) and those with owning nothing other than their labour to sell (when nothing is equated to physical means of subsistence) is unsustainable. Acquired skills and knowledge are an essential means of production complementary to any physical or indeed ‘soft’ means of production. People with more or less skills/knowledge are in different asymmetries of power when hiring out the use of those skills to the owners of market capital. Moreover, these skills/knowledge are collective social goods, not personally owned by us as individuals any more than the language we speak. Knowledge bearers do not part with their knowledge when they hire its use. Indeed, that knowledge is often enhanced in use, rather than depleted.

Fourth, as a consequence the differential rights to the public good of education are a source of fundamental inequalities, the exclusion by selection of those with more or less rights to more or less education. And here we come back to the example of the dark factories of fast fashion. Those without the social good of English language, without qualifications, with the vulnerability of being recent migrants, are at the extreme end of asymmetries of power in exchange. Graduates and school-leavers without qualifications are under fundamentally different constraints to sell their labour of one kind or another, manual or non-manual, high skilled and professional or low-skilled. Some have no option, as they enter the labour market, but for a life of low paid, insecure, work, on the worst of terms, as with zero hours contracts or bogus self-employment. Unequal rights to the public good of education combine with unequal rights to the world of market commodities. It should not be forgotten that divisions of educational exclusion and attainment were at least as significant as inequalities of income in accounting for the Trump election and vote Brexit.

Labour, in all its variety of skills, creates the wealth of society, of both market and public goods. And capitalists, in the market sphere, own and then sell at a profit what is produced by labour. With Marx, that remains a vital dynamic of inequality, indeed of exploitation. Owners of football clubs make profits and grow assets even when paying mega-salaries to their stars putatively endowed with the most uniquely valuable skills. Owners of banks make super-profits while paying market traders with physics degrees bumper bonuses.

But Marx had a one-sided view of profit-making, based on the extra-value created in production, and then simply realised in the market. Stiglitz has an equally one-sided view of profits made by primarily through distortions of the market, and Piketty a one-sided view attributing primary importance to inherited wealth – ‘inheritance’ societies, not exploitation societies. We need a theory of exploitation that combines the production side – the continuous creation of quality distinction – with the market side, through asymmetries of power in exchange.

Companies compete not to compete, but to create quality distinction in a unique and constantly shifting market. They do so by mobilising the transformative skills of labour. But they then have a position of market power.

As consumers, we are then under even more acute asymmetries of power in exchange than many of us are in our capacities as workers. Consumers are price takers, not price makers through some mythical process of aggregation of a multitude of individual purchase choices. Consumers blindly pay the price of profit, for which, as workers they have created the market potential. Organising consumer power to confront monopoly positions of powerful economic agents, whether supermarkets, Amazon or Facebook, is far more challenging than the workplace organisation of workers, and can, in general only be taken in the political arena, by consumers as political citizens.

So, exploitation is double-sided, combining quality value creation by market positioning and profit-appropriation on the one hand, and asymmetries of consumer power in exchange on the other. It is not one or the other, but both, pivoting on the wage. It is exploitation by the economic power of capital over what after all are the same social beings, worker-consumers, consumer-workers. Capital gives with one hand what it grabs back with the other.

Take Amazon. In the US it has a 67% share of a $290 billion e-commerce market. The next biggest player is Walmart, itself no small fish, with about 10%. It can then command mega-profits in its advertising and web-services markets, and has enormous power over its suppliers. And at the same time, consumers are faced with monopoly power of a dominant portal for a vast array of commodities, and drivers for Amazon deliveries are engaged as bogus self-employed, where minimum wages and working times do not apply. Amazon sits at the centre of a web of economic power-asymmetries going in all directions. That is modern exploitation, a fundamentally undemocratic organisation of the economy.

It should not surprise us. Capitalist economies have always been marked by the abuse of economic power, legitimated by law, and enforced by the state, at no time more so than the emergence of industrial capitalism from the 18th century. Coercive legislation, punitive zero-hours contracts, workhouses and incarceration, were introduced to regiment working for factory wages in the metropolis. But, contrary to the dominant view, including Marx’s,  British industrial capitalism also drove the most significant growth in capitalist slavery, in the Deep South of the US. By 1860, there were 650,000 workers in the UK textile proletariat, but over 3 million slaves producing cotton for the industry. Wage labour and slavery grew in lock step. Moreover, the legacy of slavery in the racialized hierarchies of inequality are ever-present in all the slave-owning powers of Europe and the US. The Windrush scandal was only the most recent British example, when descendants of slaves have been deported for another forced migration back across the Atlantic.

There was no single closed system capital-wage labour-commodity economy, as portrayed by Marx. And it remains so to this day. Mobile phones are produced using high-tech high paid labour in Silicon valley, slaves mining coltan in the Congo, and assembly workers in market socialist regimes in China. Many other consumer goods (clothing, shoes, white goods) are similarly the combined product of heterogeneous regimes of exploitation. We need a different conception of the economy, other than the abstract models of closed systems that were formative of the discipline of economics in the 19th century and have blinded it ever since.

These are the themes that drove Norman and I to rethink exploitation, and to consider the democratic illegitimacies of economic power, as an issue as much of political as of narrowly economic inequalities. The book is a small pebble thrown into a large pond.

Inequality and Democratic Egalitarianism. Marx’s Economy and Beyond and Other Essays. Mark Harvey and Norman Geras. Manchester University Press. 2018.