When the workers nearly took control: five lessons from the Lucas Plan 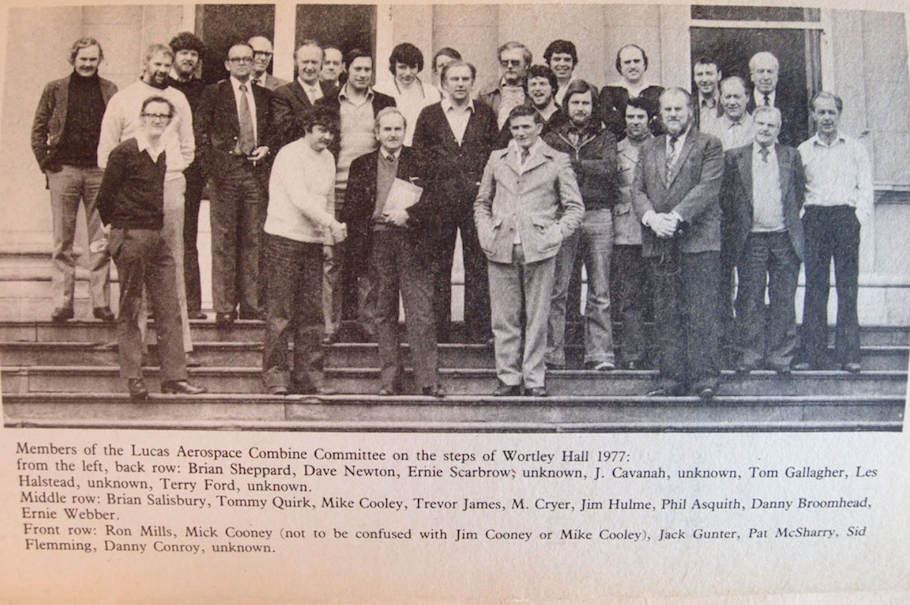 Back in the 1970s, with unemployment rising and British industry contracting, workers at the arms company Lucas Aerospace came up with a pioneering plan to retain jobs by proposing alternative, socially-useful applications of the company’s technology and their own skills. The ‘Lucas Plan’ remains one of the most radical and forward thinking attempts ever made by workers to take the steering wheel and directly drive the direction of change.

Forty years later, we are facing a convergence of crises: militarism and nuclear weapons, climate chaos and the destruction of jobs by new technologies and automation. These crises mean we have to start thinking about technology as political, as the Lucas Aerospace workers did, and reopen the debate about industrial conversion and economic democracy.

What so inspires me about the Lucas Plan is the democratic egalitarianism which runs through its every part – the work processes, the products and even the very technology they propose.

This egalitarian ethic inspired Laurence Hall to make ‘The Lucas Plan’ the focus of a regular gathering of Young Quakers in Lancaster, up the line from the Trident nuclear submarine yards in Barrow.

Eurig Scandrett from the Scottish Green Party made it the theme for Green Party trade unionists because ‘it is the most inspiring example of workers on the shop floor who get self-organised and demand to make what humanity needs.’

The fact that the plan was defeated has not diluted its capacity to inspire. For Scandrett, its defeat demonstrated that ‘it is the vested interests of the military-industrial machine which is the problem, and that workers liberating their collective brain is where the solution lies.’

The broad outline of the Lucas Aerospace workers’ story was familiar enough in the mid-1970s. Workers faced redundancies, got organised, resisted and insisted that their skills and machinery were not redundant. But here they went further. They drew together alternative ideas with those of supportive academics and, with the encouragement of Tony Benn (then industry secretary in the Labour government), produced their ‘Alternative Corporate Plan for Socially Useful Production’, illustrated with prototypes. Management refused to negotiate. The government, under pressure from the CBI and the City, made gestures of a willingness to talk, but would not move against management. The plan was never implemented, or even seriously considered, although commercial companies elsewhere picked up some of the ideas.

So what are the lessons we can draw from this past experience of ‘ordinary’ people organising and sharing their practical knowledge and skills to illustrate in the present the changes of which we dream? Some of the main ones are discussed below.

A first condition for this group of fairly conventional, mainly middle-aged, male trade unionists to create what became a beacon of an alternative economics was building the organisation that eventually provided the means by which many individual intelligences became what Eurig Scandrett refers to as ‘collective’. Corporate ‘rationalisation’ meant groups of workers were being bought, discarded and the best sold on or used till they fell apart, like sacks of old clothes.

The shop stewards at the different Lucas Aerospace sites forged collective strength by taking action over basic common issues such as wages and conditions. This served to unite groups of workers with very different traditions and interests.

Immense care and collective self-reflectiveness was needed to bring such diverse groups into a more or less united organisation.

All 35 (or so) delegates had the right to speak at meetings of the multi-union Combine shop stewards committee but decisions on recommendations to be taken back to the workforce were on the basis of ‘one site, one vote’. The decisions were binding on the delegates, who were expected to campaign for them at their local sites, although the sites were free to accept or reject them as they saw fit. This sensitive and consciously protected relationship between the Combine and the sites made it feel as though the members and local shop steward on the office and factory floor were ‘absent friends’, whose presence was palpable.

Lesson 3: Build alliances and look ahead

Although the Combine won victories, they felt as though they were engaged in a labour of Sisyphus – getting national agreement to halt job losses, only to find jobs were being slashed in different places and not because of decisions of local management.

The problem was Lucas’s restructuring towards longer production runs and more computer-controlled machinery, and its shifting investment into other European countries and the United States. The traditional approach of the trade union movement proved inadequate; instead the Combine produced its own experts and made use of outside help to educate and prepare itself.

‘We’re in a situation where politics is unavoidable,’ the Combine executive argued, in Combine News, in response to rumours of nationalisation of part of the aerospace industry. ‘Though there have been problems with nationalisation, we could, with the full involvement of all our members, insist on adequate safeguards against many of these. The advantages would be considerable, we would finally be working for our ultimate employers.’

They went on to sow the seeds of the alternative plan: ‘We could insist that the skill and talents of our members could be used to the full to engage in socially useful products like monorails and hovercraft, and that these skills are used in a much truer sense in the interests of the nation as a whole.’

This led to the presentation of the case for the nationalisation of Lucas Aerospace to Tony Benn, then secretary of state for industry. He was impressed: ‘Here was a group who had done the work to anticipate the problem. Others had come to me at the last minute saying their firm had gone bust and what could I do.’

For all his enthusiasm, he did not have the power to agree to nationalisation, but he suggested that the Combine should draw up an alternative corporate strategy for the company.

At first there was some scepticism. But the necessity of finding a new solution drove them on, and beyond management’s framework.

‘The only way that we could be involved in a corporate plan would be if we drew it up in a way which challenged the profit motive of the company and talked in terms of social profit,’ argued Combine delegate Mike Cooley, a designer who chaired the local branch of the technical trade union TASS.

The plan for socially useful production was a carefully phased process. Another Combine delegate, Mick Cooney, a fitter from Burnley, described the challenge: ‘The Combine wanted to know what machine tools we had. To do the Corporate Plan we were having to think as if we were planning. It really made the shop stewards sit up.’ The Combine asked site committees questions aimed to stimulate workers’ imagination: ‘How could the plant be run by the workforce? Are there any socially useful products which your plant could design and manufacture?’

The idea inspired workers throughout the defence-related engineering industry, including the vast yards building nuclear submarines in Barrow, where designers worked with Mary Kaldor to submit alternatives to the Labour party defence policy committee. In the 1970’s the yards were owned by Vickers which also made tanks at the Elswick works on the Tyne in Newcastle. In Vickers a strong Combine Committee had been built in response to very similar pressures of rationalisation, acquisitions and closures that had stimulated the growth of the Lucas Aerospace Combine Commitee. Both Combine Committees had links with the Institute for Workers Control (IWC) and through the conferences and political connections organised by the IWC they found common cause in the idea of alternative plans for socially useful production. The shop stewards in the Elswick and Scotwood works responded to threats of reduncancies by drawing up such plans and gaining the support of Tony Benn and his close ally Stuart Holland. They made contact with shop stewards at Barrow, especially in the design office who were already doing their own work on alternatives. There had, in Barrow, been an earlier initiative towards diversification coming from Vickers management, led by an innovative engineer, George Henson, whose Quaker principles led him to refuse to work on the TSR2 at Vickers Weybridge plant and led to his move to Barrow where management wanted to diversify away from total dependence on government defence contracts.

However, Vickers responded to subsequent government nationalisation plans by keeping the profitable diversified section, making submersibles for deep sea oil exploration and handing over the yards to the government. The separation was a major blow to any longer-term diversification programme, but it’s success was a powerful memory for the designers who were still working on nuclear submarines and they were responsive to the contacts from across the country in Newcastle to collaborate on alternative plans to submit to the Labour party’s diversification committee. Labour’s defeat in 1979 closed down these possibilities. Later however, in the 1980s, some of those designers helped to create the Barrow Alternative Employment Committee (BAEC) to produce proposals for alternatives to Trident. By this time the Barrow yards were owned by British Aerospace, which rejected the strategy of civil diversification to keep skilled teams together. BAe concentrated entirely on its ‘core business’ whatever the cost in terms of loss of jobs. The only exception was war ships, the manufacture of which dominated the yards until the recent renewal of Trident.

Terry McSorley, a member of the now defunct BAEC, says: ‘The lesson I learnt is that site-based diversification won’t work’. Instead he now argues for an approach that integrates defence conversion with industrial strategy.

Steve Schofield, who was a researcher for the BAEC, draws a similar conclusion: ‘The Labour movement needs a much more ambitious arms conversion programme to challenge the embedded power of the military-industrial-complex.’ He argues for a change in security policy towards UN peacekeeping and peace building and suggests a combination of publicly-funded, national and regional investment banks for industries such as offshore wind and wave power to ensure an equitable distribution that benefits the small group of arms-dependent communities, including Barrow-in-Furness, Glasgow, Preston, Aldermaston and Plymouth.

Drawing on Lucas and his own more problematic experience in Barrow, he is certain that trade union and community participation is essential to guaranteeing that the skills of working people are maintained and enhanced.

We are in new times for trade union organisation but interest in democratic economics is increasing with the spread of green and solidarity economies, commons-based peer-to-peer production, and grassroots fabrication in ‘hackerspaces’ and ‘fab labs’. All of which has deepened ideas about connecting tacit knowledge and participatory prototyping to the political economy of technology development, as was the case with Lucas.

The lessons from the Lucas plan provide Labour’s proposed arms conversion agency with elements of a methodology for a network of organisations with an understanding of technological development not as a value-neutral process, autonomous from society, but shaped by social choices over its development – choices that the Lucas stewards showed need to become democratic.

This ‘ordinary’ group of workers demonstrated how it was possible to create a democratic economy. It is they, after all, who have the practical know how on which that technological development depends.