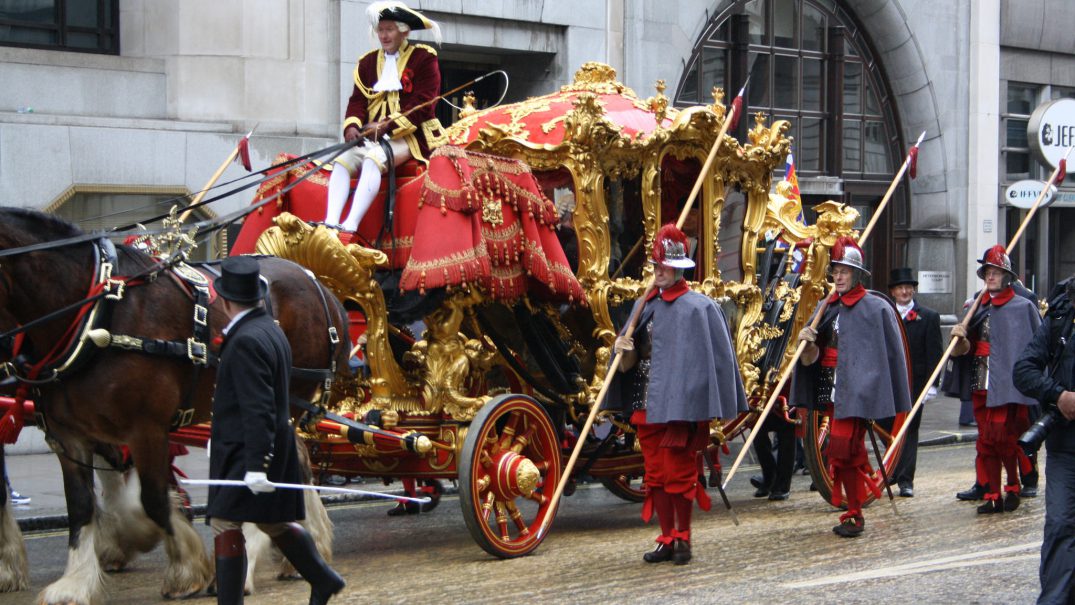 The annual Lord Mayor’s Show on November 11th will instal Charles Bowman as Lord Mayor of London. He officially represents the Worshipful Company of Grocers and he will find a lot on his plate as he starts his 12 months in office.

In everyday life Alderman Bowman is a topline accountant at the multinational firm PWC, and his job as Lord Mayor will be tricky as Britain negotiates its way out of the European Union (EU) – and the City of London finds out if it can sustain its longstanding ambition of turning London into the world’s economic hub.  This goes back to the Bank of England’s lobbying of the Macmillan government in the 1950s to let dollar-denominated (‘eurodollar’) loans be issued in Britain.

One consequence of the globalisation of the City is that international lobbying organisations, or trade associations, are an established part of its ecology.  It hosts several of them, and a large umbrella organisation, the Transatlantic Coalition on Financial Regulation – based at the former Futures and Options Association in Botolph Street – persuaded the EU to push to include finance in the planned TTIP trade agreement with the US.

Meanwhile the City of London Corporation (CLC) has taken on more of the work done by the public sector in promoting financial business.  The Lord Mayor is described first and foremost as ‘an international ambassador’ for the sector, with a status which the CLC claims to be ‘on a par with that of a cabinet minister.’

This article will examine the central role played by the CLC in the curious business of official support for these private-sector lobbying activities – and how it is threatened by Brexit.

The CLC’s task amounts to coordinating many lobbying activities of the bankers and brokers, on behalf of Her Majesty’s Government.  The coordination is active, wide-ranging and well-organised.  After half a century of evolution, it took on its present form linked with the Corporation’s Guildhall under the pre-2010 Labour governments.

The public face of the set-up is TheCityUK, a membership organisation which calls itself ‘the representative body for the UK-based financial and related professional services industry.’ Operating from Finsbury Square, it arranges briefings and round tables with political figures from Britain and abroad, publishes reports on topics ranging from Islamic finance to a ‘general election manifesto’ last May, and will hold a national conference in Manchester on November 28th.

TheCityUK boasts that it is ‘where senior government ministers, policymakers and key stakeholders from the UK, Europe and the rest of the world come to engage with and address the wider [financial] industry.’  Its 19-member Board is chaired by John McFarlane, Chairman of Barclays Bank, but also includes senior representatives of the CLC and the Greater London Authority.

TheCityUK descends in a direct line from the Committee on Invisible Exports, which the Wilson government set up under the Bank of England’s auspices in 1968.  It took its present form in June 2010 in a joint initiative of Chancellor of the Exchequer Alistair Darling and Sir Winfried Bischoff, a senior banker at Schroders and Citigroup.

In the shadows, the same initiative also created a little publicised but arguably more important sister body, the International Regulatory Strategy Group.  The IRSG’s mandate is explicitly to lobby for ‘an international regulatory framework that will facilitate open, competitive capital markets’, and it reports jointly to the public-sector CLC and the ostensibly private-sector TheCityUK.  It insists on the fact that it is ‘practitioner-led.’

It is tempting to see the IRSG as the engine room of the whole set-up.  Its policy is directed by TheCityUK’s Head of Policy in London, and its facilities by the CLC’s European Regional Manager in London and, critically, the head of the Corporation’s own lobbying office in Brussels.

The ambiguous ‘public or private?’ nature of this operation is seen in the fact that the IRSG’s Board is chaired by Mark Hoban, a Treasury minister in David Cameron’s government who now has an impressive array of City jobs in his bag.  He also sits on TheCityUK’s Board.  The compliment is returned with the presence of Miles Celic, TheCityUK’s Chief Executive, as one of two IRSG co-chairs – the other being Daniel Nussbaum, ​CLC Director of Economic Development.

The IRSG is characterised by international representativeness and a strong ideological thrust.  It works on technical issues such as capital markets, ‘coherence’ between regulatory regimes, corporate taxation and EU proposals for a financial transaction tax (which it opposes, even though the UK’s Stamp Duty on stock market trades is one of the oldest FTTs in existence).

Recently there has been an inevitable focus on Brexit.  In September 2017 the IRSG published a report, ‘A New Basis for Access,’ simultaneously in French, German, Italian, Polish and Spanish as well as English.

TheCityUK and the IRSG have similar structures, with a Board running operations and a large advisory Council directing strategy.  But there are differences.  The IRSG’s Council explicitly ‘seeks to reflect the international, cross-sectoral nature of the City of London’ and at Board level, the IRSG is rigorously international.  Besides the three who chair it, only four of the Board’s 17 members represent British organisations – accountants Deloitte, the London Stock Exchange, Prudential Insurance and Standard Chartered Bank.  Six are from the US, including Citi and JPMorgan banks and Moody’s rating agency, and three from other European countries.  Finally – remarkably – there is the Canadian media conglomerate, Thomson Reuters.

Thus, the strategy of the IRSG, which comes under the wing of what is essentially a jumped up local council, is determined largely by banks and financial firms from other countries.  There are witnesses to this multinational lobbying effort in the form of observers from the British government itself.  They represent the Treasury, the Foreign Office, the Department for Exiting the EU, the BIS Department, the Bank of England and three financial regulatory authorities.

Think about this for a moment.  Whitehall works hand-in-glove with British and foreign private ‘practitioners’ as they work out their research and lobbying plans on new financial regulations, in a body that was set up by a Labour government in the wake of a calamitous failure of the financial system.

It actually fits well with the CLC’s own electoral mandate, in which a small number of residents is overwhelmed by the ‘business vote’ of the City’s commercial residents, such as banks, insurance firms and financial exchanges. Abolished in the rest of the UK in 1969, the number of business votes in the City was greatly increased by the Blair government in 2002.

Under these arcane rules, the likes of Goldman Sachs, the Bank of China and Deutsche Bank have corporate votes in the City’s elections.  Institutionally, the Corporation actually does represent international finance, and not a specifically British interest at all.  For foreign banks and insurance companies to be determinant on the IRSG Council and Board truly reflects the Guildhall’s own ‘democratic’ mandate.

Of the IRSG Council’s 50 members, 21 represent non-UK organisations, 14 of them from the US.  However, only one is from Asia: the Japanese bank, Nomura.  There used to be more.  So is the global role steadfastly built up by the City’s patriarchs already receding?  This is not the only sign, and it may be that, without or without the Brexit vote, the high tide of that role already passed three or four years ago.

Thus, since 2015 officials of the Bank of China and Bank of Tokyo-Mitsubishi UFJ – Japan’s largest bank – have left the IRSG Council, without any Asian bodies replacing them.  And the City’s central role in financial lobbying over TTIP was prised apart when, in June 2016, a new alliance on financial regulations under TTIP was formed: the Transatlantic Financial Regulatory Coherence Coalition.  This one is based less narrowly on banking, capital markets and derivatives trading, and its office is at the European Banking Federation in Brussels.

Even before Brexit, these could be straws in the wind for a wider retreat from the City’s 60-year dream of a dominant global role.  In reality, most of TheCityUK’s and IRSG’s actual work has always been lobbying on regulations in the EU, where their influence is anyway bound to diminish with the loss of membership.  It is still unclear whether the City can even remain Europe’s largest financial centre.  As I finished writing this, a neighbour knocked on my door.  In conversation he told me he is currently helping a major US bank with plans to transfer some of its activities from London to Ireland, against the risk of a ‘hard’ Brexit.

With the UK moving outside what is now the core of the global system – the United States, the European Union and China – it is hard to see how the implicit goal of making global financial regulations converge in a network centred on London can be achieved.  But many opponents of Brexit might heave a big sigh of relief if one consequence is to cut global finance down from the high perch it occupies in British life.