On homelessness and squatting in Oxford 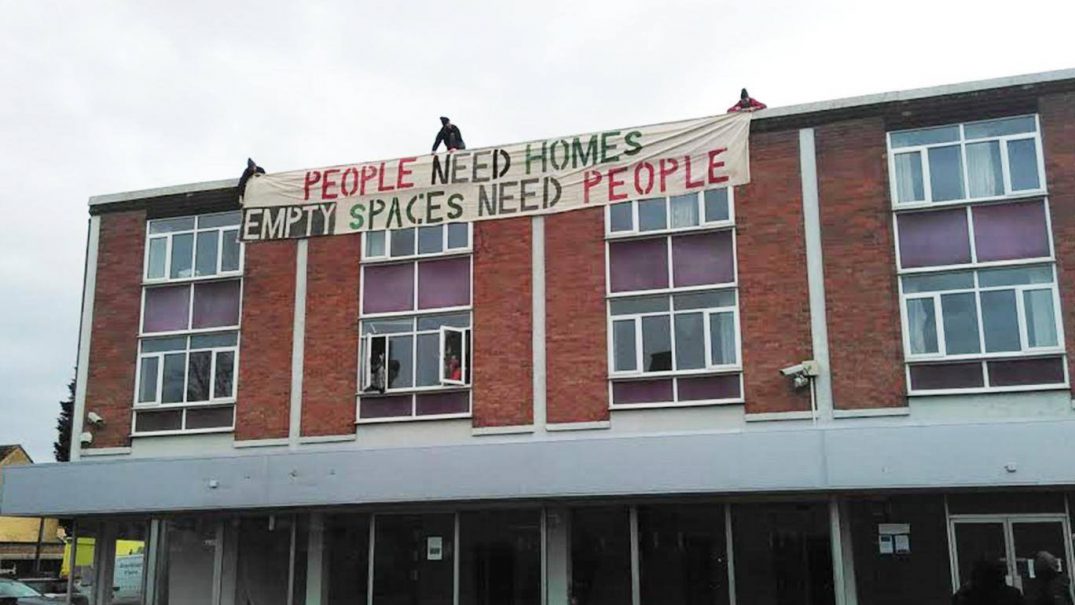 The Iffley Open House in Oxford provides space for homeless people, and a challenge to the

On the 17th February a possession order was granted to evict those who squatted Iffley Open House, a project which has housed twenty homeless men and women since New Year’s Eve. The building had to be empty by the 27th February so that Wadham College, who own this old VW garage, can begin pre-demolition works. By the start of the academic year 2019, the site will have been transformed into 135 rooms for second year students at Wadham, a college in the University of Oxford. The defendants had no formal representation – four of us sat at the back – and the court was adjourned within five minutes. The lawyer felt somehow obliged to state to the judge that ‘the application is of no disrespect to them,’ but was needed only to ratify that if resistance should be met the bailiffs would respond in kind.

This lack of resistance was strategic. That the occupation won the time it did is down to the support it garnered from the wider community. Students put pressure on Wadham, and consumers on the Midcounties Co-op, who have been paying a lease on the disused garage for the last two years. It was felt that resistance might alienate the wider community, whilst endless legalities would burn out those who cared to undertake them. More importantly, the homeless residents of the building did not want to wage their precarity on putting up the barricades. But it was only on the 30th January that the leaseholding Co-op, responding to consumer threats, granted permission to stay until April of this year. On the 17th February, Wadham – while brandishing their status as a ‘charity’ – effectively drew a line through this. How, then, will a strategy of compliance pay off, when priorities are so transparent and so uninterested. Wadham, or whoever else, will continue to pretend that it is ‘profoundly sympathetic to the plight of homeless people in and around Oxford’ (sympathy or a cognate appear a total of five times in the five statements the college have made on the squat), while it continues to (re-)file for possession. The truth is that power structures do not have sympathies. Except, of course, for those they privilege.

But this pretence can be manipulated. Indeed, the subversive quality of Iffley Open House lies in its twin demand: it is both a shelter and a critique. For it shelters some of those excluded by a failed housing system, whilst simultaneously enacting and articulating a politics that condemns the agents which perpetuate that failure. In the case of Oxford, the University has both a need and the power to house its students, who spill out of college accommodation. Thus, rent is on a par with London, as opportunistic landlords monopolize a market which the students will continue to grease. Local communities stand little chance faced with this exorbitant trainwreck, and homelessness escalates. The University knows it has responsibility in power. As such, here it does not foment some moral panic of delinquent squatters, but – with pressure from the student body – expresses its sympathy for the cause, says please and thank you, and then, naturally, calls the demolition man.

Since power is not simply about particular actors and so rarely about ethics, this should come as no surprise. As Wadham’s bursars put it in an open letter to I.O.H, ‘As a charity, the College has to fulfil its obligation to protect its assets, including this building which is intended to be developed as a home for our students.’ The statement makes perfect sense. It is implied that the University – as a charity and/or a business – will support shelters for the homeless just until these conflict with its own interests. Meanwhile, the councils will be as squeezed as any to implement the new homelessness reduction bill, and plans are already in place to ‘decommission’ – austerity speak for destroy – two of the biggest homeless shelters in the area by April 2018. So the situation is clear and predictable: the University will perpetuate privileged access to space in the city, because it is hardwired to do so. Hopefully, then, Iffley Open House can begin to articulate an anti-capitalist message to the broader community – and not least the students – that it is only through resistance and continued pressure that the University will begin to materialize a sympathy for the homeless that will otherwise remain a mere pretence.

As this squat is demolished, what happens next? It has a symbolic value, fostering a public image which is not entirely useful. For it was only on the basis of a big concession at court that the building agreed to limit capacity to twenty people, something of an affront given how big the building actually is. This was also, in part, exigent, as the work needed to keep the space clean and organized was exhausting for those responsible. But it seems probable that aspects of the less politicized support for the project were conditional on a veneer of charming functionality that is at best unrealistic and at worst pretty exclusionary. For charity always wants to be sure that it can keep its giving hand clean. Yet the psychological effects of homelessness are themselves not always clean, and trauma and addiction regularly attend them. Of course, small scale solidarity projects will not always have the material or affective resources to deal with these, but it is only on the basis of their acknowledgement that they can be worked through at all. Squats such as these aren’t – and shouldn’t be – idyllic enclaves, but they are social and affective and as such could be truly supportive. They are an opportunity for people to begin to care for one another on a level that is conditional upon nothing except a minimum of care itself.

Even though the current iteration of Iffley Open House has been short lived – just under two months – it has already provided a platform to connect different communities in Oxford and begin new conversations. As already stated, some students have come out in support, as well as locals from across the political spectrum. At the same time, the local activists who squatted the building have shown a way to confront the stigmas around homelessness, which ordinarily compound the effects of a form of injustice which is fundamentally objective with isolating moral narratives. Against the logic of charity which is always impersonal and hierarchical, the squat offers a solidarity based on connection and mutual aid. When people come out in support of those around them in this way, the ways in which the whole community is in a sense responsible for one another are revealed, and new – empowering – relations can be built upon a collective will. Evidently, spare coins will not ultimately resolve homelessness – even as they can be useful in the meantime – but one can imagine that a movement based on a real intersection of the residents in Oxford – those with homes and without – could wield enough pressure to force the University to let it be solved. All the Vice-Chancellor would need to do is squat a few big buildings. Someone should tell her that the VW garage which has just been demolished could have mathematically provided enough shelter to eliminate street homelessness as it currently exists in Oxford, and maybe more.