The first ever Festival for New Economic Thinking is taking place in Edinburgh on 19-20 Oct 2017. It brings together people and organisations who are committed to advancing economic thought and inspiring change. Here Professor Andy Cumbers explores how to reanimate economic democracy for the twenty first century.

How do we develop a democratic economy, which is fundamentally underpinned by the values of social justice, rather than exchange value? For me, alongside tackling climate change, this is the critical economic question of our time. The alienation and marginalisation felt by many from three decades of increasingly autocratic neoliberal economic governance is becoming politically manifested in different ways. Horrifyingly – chaotically, brutally and barbarically – through the resurgent economic nationalism of Brexit, Trump, Le Pen, Orban and others on the right.

A revitalised project for economic democracy

There is however a more hopeful and inspiring economic narrative emerging through the Sanders and Corbyn insurgencies on the left, as well as movements such as Podemos in Spain, which involves the rejuvenation of alternative economic thinking. In Scotland, this has been partly invoked by the radical independence campaign, the Common Weal and the intriguing recent commitments by the Scottish government to a new public bank and public ownership in the energy sector. Although, this new economic thinking is still nascent, it does build on important alternative and longer established new left traditions of a more participatory and democratic economics from the 1960s and 1970s.

A critically important document in this regard is the Labour Party’s recent publication on alternative ownership forms in the economy. This has rightly been described by the US based Joe Guinan and Thomas M Hannah of the Next System Project, as “the most exciting economic programme to be developed by the Labour Party in forty years … to reanimate the old promise of economic democracy as we explore new avenues for the wholesale democratisation of the economy and society.”

Reanimating economic democracy for the twenty first century means coming to terms with a dramatically changing global economic context and the restructuring of working conditions, categorised by growing inequalities and an increased concentration of wealth, the gig economy and the collapse of secure employment, and the decline of trade unions as a powerful countervailing force to capital.

Given these unpropitious circumstances, a revitalised project for economic democracy means moving beyond older forms centred upon the workplace and collective bargaining to develop a broader strategy for democratic participation across the economy more generally. Labour rights, unions and collective bargaining will still be important in the struggled for social justice, but a much greater remit is required to democratise the economy. The Labour Party document was important in this regard for shifting the ground in which we think about ownership beyond monolith forms of centralised state ownership to advocate a diversity of forms of democratic collective ownership including cooperatives and community based forms of ownership, and giving decision power to users and consumers of services as well as workers.

Developing new narratives around the economy

But beyond ownership, democratising the economy is also about developing new narratives around individual economic rights, and public participation and deliberation of the economy itself.

The alienation from neoliberal globalisation, which is fanning the flames of reactionary right wing economics and xenophobia of Trump and his ilk, is driven by growing individual economic security, has been produced by disciplinary neoliberal labour policies around welfare and labour market deregulation under the guise of a flexible economy. Combating this requires new thinking and policy around how we generate individual economic freedom – not freedom just to exercise property rights and exploit the labour of others – but freedom to choose how you exercise your own labour.

This is an important but neglected agenda for economic democracy, bringing together the enlightenment liberalism of John Stuart Mill with the radical political economy, remembering that freedom from economic servitude was the animating core of Marx’s thought. In an increasingly automated economy, where decent, secure and well-remunerated work becomes scarce, there is a need to rethink how individuals, families and communities secure the income and resources needed to live decent lives. This needs new thinking around the redistribution of work, new initiatives around working time, and a rebalancing of work and leisure to advance individual economic freedoms and rights to decent sustainable livelihoods.

A second key component of a revitalised economic democracy is the need to open up the economy and in particular decision-making to broader public participation and engagement. Here, one might compare favourably Denmark’s associational economy where there are a high level of cooperative associations, strong trade unions and business associations with countries such as the UK or to a lesser extent US, where elite corporate interests, dominate the economic discourse, often with the result that policy-making becomes very restrictive and tends to favour established vested interests (e.g. property owners, financial elites, media moguls).

This also requires a strong deliberative public sphere where economic ideas and narratives are not the preserve of elites but are the subject of debate, contestation and even conflict between competing groups. The contemporary global economy suffers a knowledge deficit in the sense that economic discourses – alongside wealth – have become appropriated and concentrated through elite interests and institutions. Again, radical liberal ideas, particularly those of pragmatist thinkers such as John Dewey can be wedded to broader political economy concerns in forging more active and radical civil societies that can contest elite hegemony and construct alternative economic narratives. As Dewey family put it:

‘No government by experts in which the masses do not have the chance to inform the experts as to their needs can be anything but an oligarchy managed in the interests of the few… The world has suffered more from leaders and authorities than from the masses.’

Economic decision-making should be embedded within the democratic public realm as far as possible, rather than delegated to a remote class of technocratic experts who end up serving elite and established interests. The triumph of a form of liberal capitalism globally – increasingly enshrined through the institutions of the Washington Consensus and supranational organisations like NAFTA and the EU – has not produced the much-trumpeted democracy or effective freedom of the individual, but instead over time has led to the effective suspension of democratic politics in many places: Greece and Italy for example in the wake of the Eurozone crisis.

If we accept that democracy is ultimately about offering competing alternative visions of society that are given effective voice in public debate, and individual economic rights to both flourish and participate in such public debates, the emergence of an austerity driven last gasp neoliberalism that ruthless represses, neutralises or incorporates alternatives to corporate capitalism is paving the way for the advance of the far right and economic nationalism, shading in to fascism, everywhere.

A more democratic economy would require greater investment in the development of popular education, engagement and participation of the citizenry in economic decision-making through institutional and organisational forms that both foster collective decision-making but also decentralise and disperse economic knowledge and practice throughout the community. Collective learning institutions dedicated to the common good should replace elite institutions (such as the rent-seeking neoliberal university model) that appropriate knowledge and education for commercialised ends.

The appropriate question then becomes what kind of economic institutions would be needed to deal with these issues? A citizens income is a critical element to the latter – set at a level that allows individuals the positive freedom to choose how they sell their labour. And democratic forms of public ownership are one important way to deal with the increasing capture of common wealth on behalf of the elite. The devolution of economic decision-making by the state and the increased use of participatory planning and budgeting for a are also essential ingredients. A functioning democratic economy would still require a mix of markets and planning, some private alongside the expansion of public and collective ownership. To retain its dynamism and ability to adapt to changing circumstances, we would also need to encourage the right kinds of markets (e.g. farmers’ markets rather than stock markets), innovation, entrepreneurialism and even competition, albeit with very different forms of social regulation and economic institutions than are currently on offer. 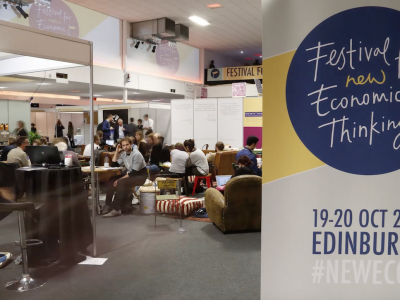