The principle that the internet should be as fast as possible for all its users means small voices with big ideas can transform society. Let’s keep it that way. 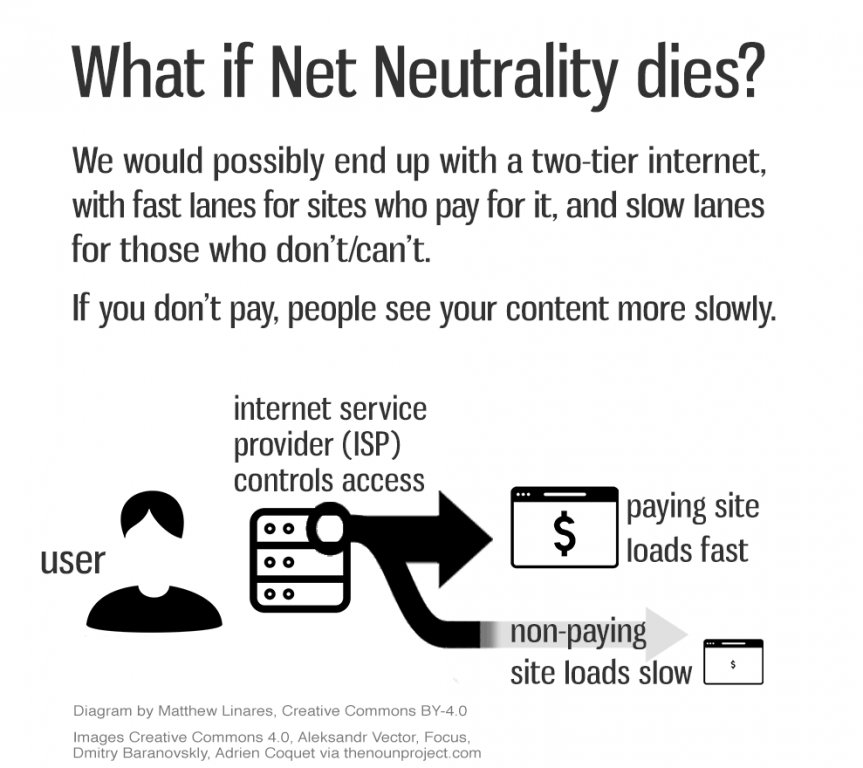 Internet freedom as we know it is being threatened by a shady axis of internet service providers (ISPs), the US communications regulator (the FCC), and a swarm of fake public consultation signatories.

The particular freedom in question is net neutrality: a notoriously opaque term which describes the fact that ISPs currently deliver all website content to all users as fast as possible, without charging fees for preferential service. As I write, the FCC is now poised to drop its commitment to enforcing net neutrality.

This is why we fight for Net Neutrality. Image: Matthew Linares, CC-BY-4.0. Tweet this→

Commercial opponents of existing regulation, like internet providers Verizon, Comcast and AT&T, are pushing for the right to deliver websites that pay for the privilege more quickly than sites who don’t. Under their preferred rules, this article might load more slowly than an equivalent piece on a site paying for premium content distribution. Although many of the major players deny this is why they are lobbying on the issue, if they get their way, ISPs would no longer be legally compelled to stay neutral as to what content to show first – money could determine the flows.

The Trump regime has replaced the FCC’s leadership with Ajit Pai, a former lawyer for the major ISP Verizon. With its newly appointed chief unsurprisingly acting in line with the demands of big business, the FCC has committed to breaking its previous commitment to uphold net neutrality. That commitment was hard earned through vigorous civil society campaigning and memorable online mobilisations. If it happens, the precedent would be set for similar policy outside the US.

Today’s internet would not have known such immense innovation if less wealthy operators, with good ideas, had been denied the level playing field of net neutrality.

This is a debilitating blow for small online operators, bloggers, startups, consumers and all those who have benefited from the low barrier to entry provided by equal access to all services. Today’s internet would not have known such immense innovation if less wealthy operators, with good ideas, had been denied the level playing field of net neutrality.

Pai has stated that the net neutrality guidance introduced by the FCC two years ago was “a serious mistake”. He has vociferously denounced it as overbearing regulation and even attacked groups, such as Free Press, who have sought to protect it.

The feeling that this is a classic case of business co-opting the regulator is supported by Pai’s previous role as Verizon counsel, and by the scandalous public consultation process being run by the FCC on the issue.

Campaign group Fight for the Future has flagged up the fact that thousands of fake signatures against net neutrality have flooded the online petition. This includes many names belonging to real citizens who actually support net neutrality but have been publicly presented on the petition as opponents of it.

All this suits the big ISPs, and the FCC’s current leadership, but reeks of foul play, and undermines the public reputation of some of those citizens falsely listed. The FCC has whitewashed the matter, and is moving ahead with the consultation regardless.

Unsatisfied with the FCC response, Fight for the Future set up a tool to allow people to check if their name has been abused in this way. In return ISP Comcast has issued a legal threat to shut the tool down for unfair association.

This murky consultation deeply undermines public confidence in the FCC’s competence and commitment to a fair outcome. That a government agency in the time of Trump is unconcerned by fake views affecting democratic process will surprise nobody.

The civil society response to the proposals has been significant. The online backlash to previous similar threats to the internet had thousands of sites, including Wikipedia and Google, “slowing down the web” to show what’s at stake. Web-wide protests are similarly planned now.

A day of action is to be held on July the 12th, calling on websites large and small to boldly illustrate the issue to their users.

However, the struggle for net neutrality is complex, not least since people don’t easily understand what the problem is. In 2014, Congresswoman Anne Eshoo took to Reddit with a contest to find a simpler name that communicated the concept more clearly. This failed to find a replacement despite enthusiastic participation.

Yet it is widely recognised as a cornerstone digital rights movement, and has seen seminal support from players such as Tumblr, the hyper-visual blogging monolith, which had been at the forefront of pro-net-neutrality action. In a twist, Tumblr now appears to have gone quiet on the issue, supposedly since Verizon bought out Yahoo, which itself owns Tumblr. Backroom wrangling around the topic is taking its toll.

Notwithstanding the excellent mobilisations from open internet advocates, the FCC’s impending actions could quickly transform the internet into another broadcast channel presided over by large corporations, much like television. Whilst that decision legally affects the US alone, the precedent would be felt further, and most citizens are unaware that this is taking place.

This is a grave moment that deserves far more attention and yet, amidst today’s political maelstrom, there’s a risk it may remain unseen until it’s too late. Internet activists have a long history of imaginative interventions. The current moment is ripe for novel tactics to give web citizens and consumers greater leverage in this crucial global debate, which is currently dominated by a handful of powerful US groups.

Net neutrality is one of the principles that gave us the internet we know, where small voices with big ideas can innovate quickly to transform society. In light of that, it makes sense to call for imaginative possibilities for resistance.

Net neutrality is one of the principles that gave us the internet we know, where small voices with big ideas can transform society.

The net is alive with clever, user-focused projects which apply novel thinking to challenge structural issues, often at the expense of bigger players. From ad blockers, to obfuscation plugins which confuse data-collectors, there is a good and growing ecosystem of tools to fight back.

In this spirit, I propose a software solution which, if built, could counter the war on net neutrality. Whilst I do not affirm its full technical feasibility and effectiveness, nor can I myself build it with current capacity, I do feel that contributions like this should be encouraged and explored as an exercise in collective, campaign solutions.

The idea is to create a web browser extension that actively slows down loading times for websites known to be benefiting from paid, web-speed privileges. That is: it corrects for what may happen if net neutrality protections are dissolved.

Sites proven to be, or suspected of, paying for faster delivery of their content, would be added to a public database and actively slowed down by the extension through the browser e.g. by delaying elements on the given site. Those sites could even be made to load more slowly than other sites so as to compensate for the slowness on other sites experienced by web users without the extension.

The tool, or a connected system, could also calculate which sites were benefiting from speed increases by comparing download speeds across users and compiling the results into a shared database. This should be possible given that, ultimately, speed tiering observably affects user experience. There would be other means of adding and removing sites from the blacklist, which itself would constitute an active register of net neutrality’s opponents.

Those using the plugin would be sacrificing speed on certain sites – but such is the nature of protest.

Those who opt to use the plugin would evidently be making the sacrifice of speed on certain sites – but such is the nature of protest. In any case, the inconvenience would be minor compared to the stark nature of the two-tier internet we seek to avert.

Plugin users would also likely emanate from tech savvy demographics, a point of note for sites considering the impact of the business decision to benefit from internet fast lanes.

To push the project one step closer to realisation, I have set up a GitHub repository to start the process of actually building Need Neutrality. GitHub is where developers collaboratively work on software, and most open-source projects have a repository there. My repo contains some boilerplate code and an outline specification for how the system might work. Nevertheless, developers with expertise of relevant aspects will be required to support the project if it’s to get off the ground – so please contribute if you can.

This is not how open-source software is typically made, and people with ideas for such a thing usually need to do more than upload a specification and expect others to do the hard bit – which is what it seems I have just done. However, Github is a platform for various kinds of text-based offerings besides software code including documentation, legal policies, and to-do lists, all of which can be collaboratively improved upon.

If you have any thoughts or contributions to the project, please note them below or get in touch with me.

I hope we will see many other activist approaches at this critical juncture. We should expect commitments to net neutrality, as a clear matter of ethics, from all firms and internet entities, and I hope campaigns will arise which hold websites to that standard in the most public possible fashion.

Whilst the notion that we could be mere months from the end of net neutrality is disconcerting, we must take the opportunity to bring the web’s connected populations together in new forms of activism. A desirable outcome from this episode would be the retention of net neutrality in such a way that ISPs felt unable to undermine it for fear of consumer action.

The internet is too important as a public space for its core principles to be decided by one, partisan, government agency and a gaggle of profiteers. May this be another of the Trump regime’s careless ploys that trips up at the hands of the people.

July 12th is Battle for the Net action day.