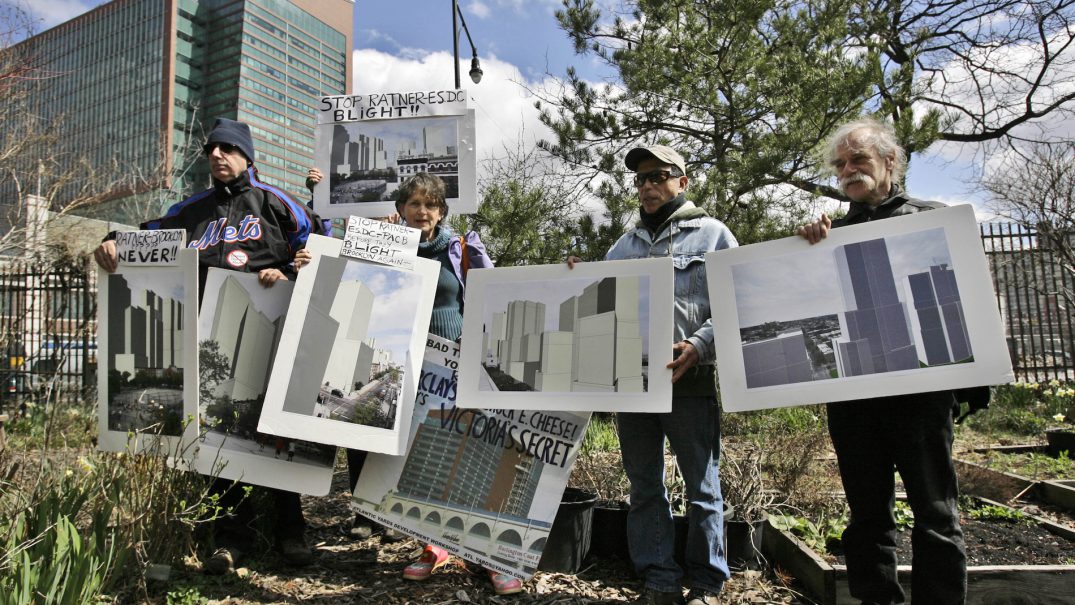 Standing in the Brooklyn Bears community garden across Flatbush Avenue, a group of concerned citizens and neighborhood residents hold artists’ renderings of the proposed Atlantic Yards project scheduled to be built behind them and around the garden, in New York, Thursday, April 5, 2007. A coalition of activists and neighborhood residents trying to block the project filed a lawsuit against Forest City Ratner Companies, Atlantic Yards’ developers, the Empire State Deveolpment Corporation, the Port Authority Control Board and the Metropolitan Transportation Authority, claiming the project underwent an inadequate environmental impact study. (AP Photo/Kathy Willens)

Say, for instance, that a community group takes over an abandoned piece of land in their neighbourhood and works together to transform it into a thriving and well-used community garden and growing space. This happened in the Lower East Side of New York City in the 1980s. The new community garden will no doubt improve the physical environment of the neighbourhood, make it a more attractive and pleasant place to be in, and help to improve the wellbeing of the people who use it. On the surface everything seems great – a local community have come together to improve the area their live in. This is perhaps ‘regeneration’ as it should be. It seems that land is often safer in the hands of residents than those of land owners: Lower East Side landlords reportedly took it upon themselves to burn out occupants for insurance monies rather than let the land be put to good use. It was this act of destruction that inspired the founding of the community garden.

A more everyday – but no less devastating – problem arises when the value of properties nearby the now-thriving community garden begin to rise. The garden has had a positive impact on the ‘locational value’ of the neighbourhood – a spill-over effect or ‘positive externality’ that could eventually threaten the existence of the community which the garden helps to sustain. Rising property values will begin to attract buy-to-let investors, small-scale developers and, worst of all, land speculators – putting in motion a series of processes that will see rising rents push existing residents and businesses out. These economic agents are drawn to the area by the prospect of appropriating the positive spill-over in value produced by the garden for their own private gain. What’s worse, unless it is adequately protected by planning policy, the community garden could find itself under threat from profit-hungry developers and speculators. This is one of the tragic paradoxes of regeneration – that those places and activities which initially make an area attractive and desirable are ultimately displaced or destroyed as gentrification takes hold.

Enter land value tax (LVT) – an idea with a long lineage in economic thought and perhaps the simplest solution to the vexatious problem of regeneration-cum-gentrification.

Rather than tax property – as council tax and business rates do – LVT taxes the unimproved value of land. Agricultural, industrial, commercial and residential land all have different values – largely as a result of their different location and the use that is most appropriate to these locations. Thus, LVT is a tax on the ‘locational value’ of a piece of land, though this value is admittedly mediated through land-use designation of the planning system. Set at a flat rate of 5-10%, LVT, rises in line with the value of a piece of land. Hence, the rise in land value that results from any improvement to a neighbourhood or town centre – be it a community garden, new transport links, local street market, or enterprise hub – will be captured and socialised through an LVT. The windfall in land value that is produced by regeneration can no longer be appropriated by predatory developers and speculators, but is made available to the community that produced it for reinvestment in the continuing improvement of their area.

There are many arguments for LVT: it’s efficient and hard to avoid, encourages productive economic activity, and tackles inequality. To these we can now add a further point in favour: LVT allows local communities to enjoy the benefits of regeneration whilst mitigating against the risk of gentrification that regeneration brings.